Finished cattle prices are stuck in a positive rut for this time of year. Week after week of steady prices is a good sign for cattle feeders, especially when prices would seasonally be declining. It has been said many times that prices can do one of three things, increase, decrease, or stay the same. Staying the same seems to be the bet that people should put their money on. The take away from this steady trade is that third and fourth quarter prices are shaping up to be fairly strong if prices seasonally increase going into the fourth quarter. The real question is if cattle feeders are gaining leverage or if packers are simply attempting to appease the masses since they are making large profit margins.

The Choice boxed beef price increased for 11 consecutive weeks moving from about $228 to $338. This week will mark the first week-over-week price decline and will likely mark the beginning of a slow summer price decline. There is no way to know how quickly and how much prices will decline. Some analysts think boxed beef prices will decline rapidly, but the price of boxed beef is likely to decline at a similar rate to the price increase. Thus, a person may have to decide for themselves if prices increased rapidly or not. Some concern is that domestic demand will take a hit with high retail prices of beef and that may be coupled with softer international demand. However, the demand side of beef appears to be solid, which is why prices are expected to decline over the next two to three months. Summer grilling and more restaurant business is expected to be a supporter of prices and thus moderating the speed of price decline. Regardless of the situation, packer margins will narrow, but they will continue to be largely positive.

OUTLOOK:   Based on Tennessee weekly auction market data, steer and heifer prices were mostly steady compared to last week. Slaughter cow prices were steady to $3 higher while bull prices were steady to $4 higher compared to the previous week. Week to week variation in cattle prices is generally influenced by both the actual market price moving and the quality of cattle moving through the market. It is difficult to know which one had more influence on price changes from one week to the next without seeing the cattle. However, market reporters will often make a statement on the report to indicate if the quality of cattle was not up to its usual standard or if there were a higher percentage of high quality cattle going through the specific sale. This is valuable information when evaluating price changes from one week to the next. It also can help individual producers have a better idea of the true value of the cattle they have at home.

The point is that many factors influence cattle prices and market reporters do their best to provide a good description of the cattle that were traded that week. People using USDA reports should read the commentary provided in a report to better understand the prices presented in the report. With that said, feeder cattle futures technically represent the same quality animal every day, which means the price should be based on expected supply and demand. The market has again come under some pressure with part of the pressure stemming from strong corn prices. The futures market appears to be filled with uncertainty as uncertainty abounds in the feed market, consumer beef demand, and future supply of cattle. It is unlikely the volatility in the market will cease anytime soon, which means cattle producers will most likely have to market cattle into the uncertain market. It is important to keep an eye on prices each week to determine when a good time to market cattle will present itself. 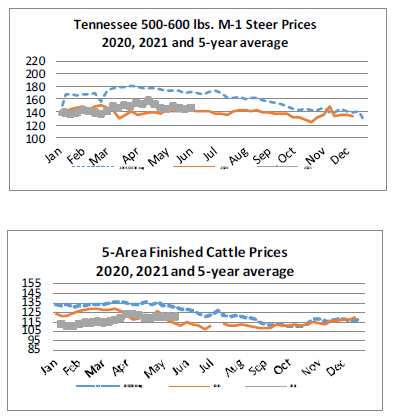