This month’s 2020/21 U.S. corn outlook is for greater feed and residual use, increased corn used for ethanol production, larger exports, and lower ending stocks.  Feed and residual use is raised 50 million bushels to 5.7 billion based on corn stocks reported as of March 1, which indicated disappearance during the December-February quarter rose about 6 percent relative to a year ago.  Corn used to produce ethanol is raised 25 million bushels based on the most recent data from the Grain Crushings and Co-Products Production report, and the pace of weekly ethanol production during March as indicated by Energy Information Administration data.  Exports are increased 75 million bushels, based on export inspection data for the month of March that was the largest monthly total on record, surpassing the previous high set in November of 1989.  The season-average farm price is unchanged at $4.30 per bushel, as reported prices through February indicate much of the crop was marketed at lower prices.

Major global trade changes include lower forecast corn exports for Ukraine, based on shipment data to date.  Corn imports are raised for Bangladesh.  Barley exports are raised for Canada, Argentina, and the EU-27+UK, with partly offsetting reductions for Iraq and Kazakhstan.  Barley imports are sharply higher for China, with a partly offsetting reduction for Morocco.  Foreign corn ending stocks are essentially unchanged from last month, mostly reflecting increases for South Korea and Pakistan that are offset by a reduction for Saudi Arabia. 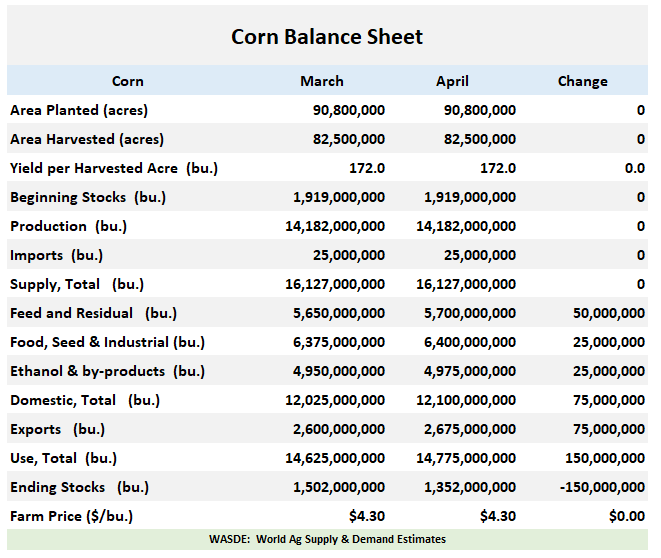