Compared to last week, steers and heifers sold steady to 3.00 higher.  Receipts this week are typical for the last full marketing week of a year when some producers want to sell before winter weather really gets here.  Some will also defer payment at their local auction markets to the next year.

Over the next two weeks, livestock auction volumes will be very limited with several acknowledging the holidays in front of them and letting employees rest up for the receipts that will be substantial the first full week of 2021.

There are several special cow sales scheduled across the Plains the next two weeks for an opportunity for cow/calf producers to make financial moves they feel necessary for 2020.

Colder weather has spread across this country this week just prior to the official calendar start to winter that is this upcoming Monday.  Stockpiled grass or what ranchers could stockpile will go faster as energy needs of cows/calves & grazing cattle increase as the temperatures drop.

This week, Winter Storm Gail showed us what ole man winter can do by dropping significant amounts of snow from Ohio and West Virginia up through the Northeast as over 51 million people were under a Winter Storm Warning.

The fall/early winter-feeding period has been good so far from a feedyard perspective.  A little moisture doesn’t hurt near as bad as a 10-inch snow that comes before the ground has a chance to freeze.

Retailers completed their beef holiday buying a couple weeks ago and the Choice cutout has dropped over 30.00 in three weeks with over 20.00 of that decline happening last week.  On the week, Choice cutout closed 5.25 lower at 208.63, while Select was 1.44 lower at 194.27; as the Choice-Select spread has narrowed to 14.36.

Cattle Slaughter under federal inspection estimated at 659 for the week, 6K less than last week and 9K less than a year ago.

December first Cattle on feed was reported at 100 percent of a year ago; Placements at 91 percent; with Marketings at 98 percent.

Next week on Tuesday, the complete list of cold storage inventory items will be released by USDA National Agricultural Statistics Service (NASS).  Go to https://www.nass.usda.gov/ after 3:00 PM ET on Tuesday to retrieve the most recent data.

On behalf of the Livestock, Poultry and Grain Market News, we would like to wish safe and happy holiday season.  This will be the last National Feeder Cattle summary published for 2020.  May you have a very blessed New Year! 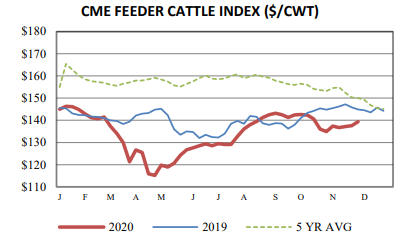