The 2020/21 outlook for U.S. soybeans is for higher supplies, crush, exports, and lower ending stocks compared to 2019/20. The soybean crop is projected at 4.125 billion bushels, up 568 million from last year on increased harvested area and trend yields. Despite lower beginning stocks, soybean supplies are projected up 5 percent from 2019/20 to 4.720 billion bushels. Total U.S. oilseed production for 2020/21 is forecast at 123.2 million tons, up 16.1 million from 2019/20 mainly on higher soybean production. Production forecasts are also higher for sunflowerseed, peanuts, and cottonseed. Canola production is forecast lower on a reduced yield.

Global protein meal consumption outside of China is projected to increase 2 percent in 2020/21, down from the prior 5-year average of 3 percent due to the slowing global economy. Protein meal consumption in China at 6 percent is stronger than the prior few years, however, as China recovers from the August 2018 outbreak of African Swine Fever. With higher protein meal demand, soybean exports are expected to increase 8.0 million tons to 161.9 million. China accounts for most of the increase in shipments with imports rising 4 million tons to 96 million. Global soybean ending stocks are projected at 98.4 million tons, down 1.9 million from 2019/20. Lower year-over-year U.S. stocks offset higher stocks in China, Brazil, and Argentina. 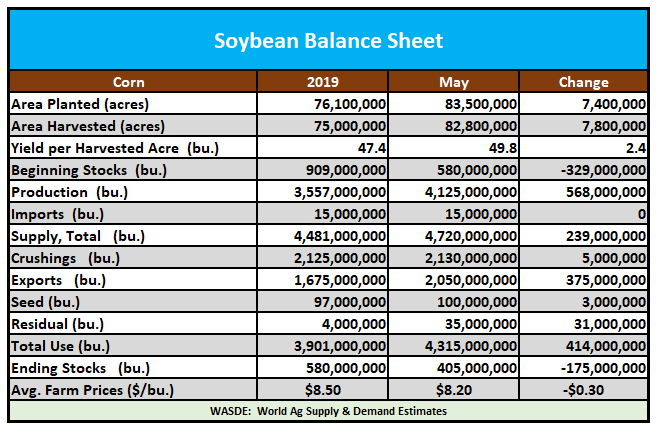