In the West, the recent heat wave has ended in most areas. However, above-normal temperatures linger in the Northwest, where drought-stressed dryland crops continue to suffer. Showers and thunderstorms have developed in a few areas, most notably in the drought-stricken Southwest. However, some of the thunderstorms are producing lightning without the benefit of rainfall, enhancing the threat of wildfire ignition.

On the Plains, hot, mostly dry weather prevails. Today’s high temperatures will reach or exceed 100°F in several areas, mainly from western Texas to central South Dakota. The heat and dryness are promoting winter wheat maturation and harvesting. However, in areas experiencing drought—mainly across the northern Plains—rangeland, pastures, winter wheat, and summer crops continue to suffer significant impacts. On June 20, more than one-quarter (27%) of the U.S. spring wheat had headed, compared with the 5-year average of 18%, while 37% of the crop was rated very poor to poor.

In the Corn Belt, overnight showers and thunderstorms provided some beneficial moisture for corn and soybeans in Iowa and portions of neighboring states. However, very dry conditions persist across the far upper Midwest, including much of the Dakotas. In addition, hot weather prevails west of the Mississippi River, where today’s high temperatures will generally range from 90 to 100°F. Meanwhile in the eastern Corn Belt, today’s highs will remain at or below 80°F.

In the South, lingering showers are mostly limited to Florida’s peninsula, although thunderstorms are lurking near the Texas coast. Across much of the region, dry weather and near- or below-normal temperatures favor summer crop development and a variety of fieldwork activities, including cutting hay and winter wheat harvesting. 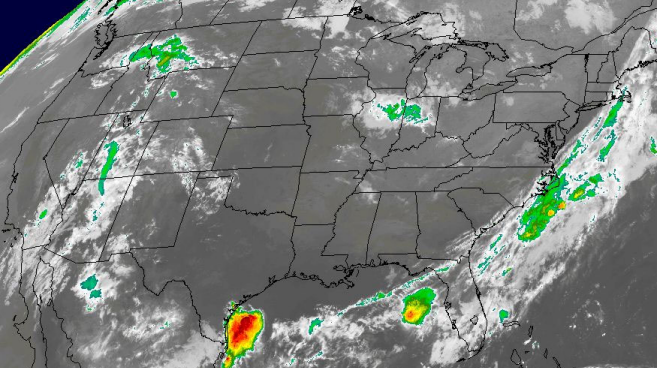 Outlook: Starting tonight and continuing for several days, significant rainfall events will unfold across the Midwest. Five-day totals could reach 5 inches or more from southeastern Iowa and northern Missouri into southern Michigan and northern Indiana. A broader area, including the central and southern Plains and the mid-South, will also experience periodic heavy showers. However, the precipitation shield will have a sharp northwestern edge, with only light showers expected across the northern Plains and far upper Midwest. West of the Rockies, widely scattered showers are not expected to provide meaningful drought relief. Furthermore, building heat across the Northwest will maintain significant stress on rangeland, pastures, winter wheat, and spring-sown crops. Farther east, however, much of the eastern half of the country will experience near- or belownormal temperatures.

The NWS 6- to 10-day outlook for June 28 – July 2 calls for the likelihood of above-normal temperatures throughout the northern and western U.S., while cooler-than-normal conditions will cover an area stretching from the southern Rockies to the southern Atlantic Coast. Meanwhile, below-normal rainfall from the Pacific Northwest to the northern and central Plains and upper Midwest should contrast with wetter-than-normal weather across the South, East, and lower Midwest.