Exports in November totaled 277 million pounds, 6 percent below November 2021 but 3 percent higher than the 5-year average. The value of exports in November fell by over 100 million dollars from 2021, but the year-to-date value of exports increased 13 percent year over year. The total value of beef exports through November topped 10 billion dollars, already surpassing the full-year value from 2021, the previous annual record. As shown in the chart below, export values through November have topped the annual values in 2021 in several key markets, including South Korea, China, and Taiwan. 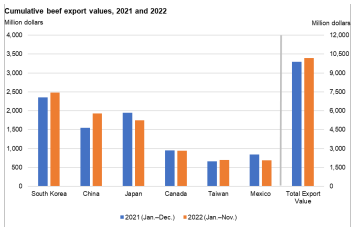 Despite higher prices that have been bolstered by a strengthening U.S. dollar, global demand for U.S. beef has remained strong. The Nominal Broad Dollar Index, calculated by the Federal Reserve as an indicator of the exchange rates of the U.S. dollar against selected foreign currencies, has increased substantially since January 2021. The chart below shows how exports remained strong through August even as the index rose 6 percent from the start of 2022. Limited available supplies from other major beef suppliers such as Australia and New Zealand have supported the strong exports by the United States. The index fell again in December, but limited beef supplies next year from lower production will continue to support the price of U.S. beef, making it less competitive on the global market, especially as Australia recovers from the supply chain issues causing fewer exports from that country this year.

Cumulative exports through November are shown in the table below. Exports continue to outpace last year due to strength in the first 8 months. However, cumulative exports for September through November are 1 percent below last year. Based on recent trade data, the beef export estimate for fourth-quarter 2022 is lowered 20 million pounds to 850 million, 6 million pounds below fourth-quarter 2021. The estimate for annual exports in 2022 is 3.542 billion pounds. The 2023 annual forecast is unchanged at 3.090 billion pounds. 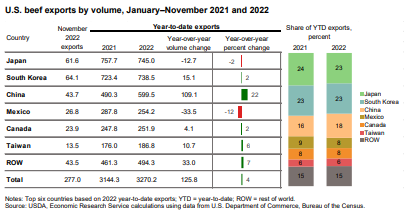 The chart below shows the fill rates from the tariff-rate quotas (TRQ) in 2022. Once a quota is filled, imports entering under that quota are subject to a higher tariff. Imports from countries that do not have a specific quota or free trade agreement are counted under the “Other” quota. A majority of the product that filled the Other TRQ by April of 2022 was from Brazil. The 2022 TRQs ended on December 31 and were reset on January 1. Thus, the countries with a full quota in 2022 can once again send beef to the United States under the lower in-quota tariff. As of January 6, the Other quota for 2023 was already almost 34 percent full according to the U.S. Customs and Border Protection Quota Status Report. This is likely due to beef from Brazil, which sent nearly 100 million pounds in January 2022. While some of the spike in early 2022 was caused by China’s temporary ban on Brazilian beef, it appears that importers are again taking early advantage of the reset quota this year.

Due to this faster expected pace of imports in the first quarter, there was a temporal shift of imports from each of the later quarters of 2023, plus an additional 50 million pounds added, to raise the first-quarter forecast to 850 million pounds. Accordingly, the second-quarter forecast is decreased to 850 million, the third quarter to 890 million, and the fourth quarter to 810 million. This still leaves the second half of the year above 2022 by 11 percent, when production is expected to decline year over year at an increasing rate. The 2023 annual forecast is raised by a total of 50 million pounds to 3.400 billion, reflecting increased imports from South America and Oceania. Expectations for imports in 2022 are unchanged at 3.376 billion pounds.