Windrow Grazing: An Alternative to Feeding Hay in the Fall and Winter

Harvested feed costs can be one of the largest expenses to cattle producers. Windrow grazing, sometimes called swath grazing, is a management practice that can significantly reduce harvesting and feeding costs. Swathing the crop and leaving the windrows in the field provides several advantages.

• Eliminates the costs of baling and hauling bales off the field.

• Returns some nutrients and organic matter from consumed forage back to the soil where the crop was grown. 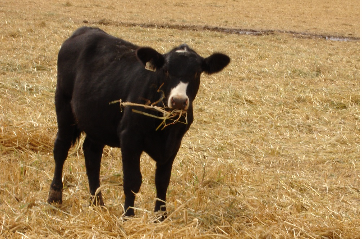 Windrow grazing is a management practice that can significantly reduce harvesting and feeding costs. Photo courtesy of Aaron Berger.

In Nebraska, 75-80 percent of seasonal precipitation falls in the six-month period from April through September. Only 20-25 percent of precipitation falls from October through March. This seasonality of precipitation allows for swathing forage crops in early fall and preserving them through the fall and winter with minimal deterioration in quality due to weathering. Cool, dry conditions frequently associated with late fall and winter in Nebraska are favorable for preserving forage in a windrow.

Across Nebraska, the average amount of precipitation increases from west to east. Greater average precipitation in eastern Nebraska does increase the risk of windrow deterioration compared to drier conditions in western and central Nebraska.

Windrow grazing of warm season annual forages such as foxtail millet, sudan grass and sorghum x sudan grass hybrids can provide an excellent way to harvest these forages when they are at an optimum for quality and efficiently utilize them with minimal waste. Windrow grazing of cool season annual forages such as spring triticale, oats and spring barley planted in late summer can provide high quality late fall and winter grazing as well.

Snowfall from October through March can be quite variable; however, extended periods when snow cover would prevent windrow grazing are limited. If cattle know that the windrows are present, they will dig through the snow to get to the windrows.