Showers and thunderstorms will linger through the weekend across Florida and along the Gulf Coast. 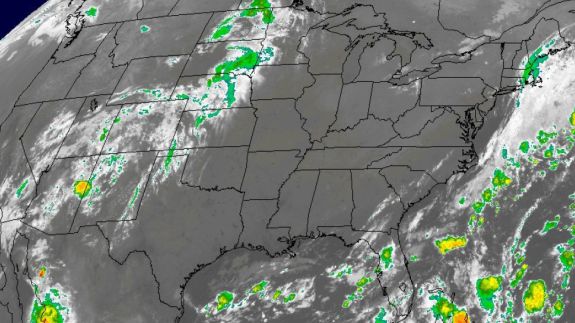 In the West, a suddenly active monsoon circulation is contributing to scattered showers in the Four Corners States and environs. The Southwestern showers are curbing the threat of wildfires and locally easing short-term dryness. Meanwhile, dry weather in the Northwest favors winter wheat harvesting and other fieldwork.

On the Plains, showers in the vicinity of a weak cold front stretch from the Dakotas to Colorado. Meanwhile, dry weather persists on the southern High Plains, where rain is needed. In Texas, rangeland and pastures were rated 58% good to excellent on July 21, a decrease of 9 percentage points from the previous week.

In the Corn Belt, cool weather prevails. Dry conditions cover most areas, but a few showers have begun to overspread the upper Midwest. Pockets of short-term dryness have developed in several areas. In Illinois, for example, July 1-24 rainfall totaled just 0.46 inch (11% of normal) in Lincoln and 0.23 inch (7%) in Springfield.

In the South, lingering showers are mostly confined to Florida’s peninsula and a few locations in Deep South Texas. Elsewhere, mild, dry weather is nearly ideal for fieldwork and summer crop development. Pockets of dryness and drought are largely limited to Alabama, southern Texas, and the southern Atlantic States.

Outlook:   Showers and thunderstorms will linger through the weekend across Florida and along the Gulf Coast.  Meanwhile, a pair of cold fronts crossing the northern U.S. will draw moisture associated with the Southwestern monsoon circulation northward, leading to occasional showers from the Great Basin and the Four Corners States northeastward across the northern Plains, the Midwest, and the Great Lakes region. Elsewhere, dry weather will prevail during the next 5 days from the central and southern Appalachians to the northern and middle Atlantic coast, while hot weather will be mostly confined to the Great Basin and Intermountain West.

The NWS 6- to 10- day outlook for July 30 – August 3 calls for near- or above-normal temperatures nationwide, except for cooler-than-normal conditions in northern Washington and the lower Mississippi Valley. Meanwhile, near- or below-normal rainfall across much of the Plains and Northwest should contrast with wetter-than-normal weather in the Southwest and a broad area covering the mid-South, Ohio and Tennessee Valleys, the lower Great Lakes region, and the Northeast.