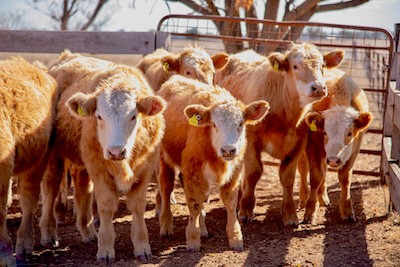 To Succeed at Targeted Metaphylaxis, It Takes a Plan

DULUTH, Ga. (April 8, 2020) — Consumers have made it clear: They want fewer antibiotics used in food animals. As a result, producers and veterinarians are reevaluating their approach to metaphylaxis, the administration of antibiotics on arrival to calves at high risk of bovine respiratory disease (BRD).

Recently, the concept of targeted metaphylaxis, or using metrics to narrow the use of antibiotics from entire groups of cattle to individual high-risk calves, is gaining popularity. Limiting antibiotic use has the potential to reduce producer costs and promote antimicrobial stewardship.

But how can producers ensure their targeted metaphylaxis program is a success? “You need a consistent plan for how to select animals, a method to evaluate your results and the involvement of your veterinarian throughout the process,” explained Joe Gillespie, DVM, Boehringer Ingelheim.

Traditionally, metaphylaxis has been the go-to approach to reduce sickness and death in calves that are at a high risk of contracting BRD due to factors such as unknown health histories, commingling, transportation and other stress-producing events.

With a group of high-risk calves, it’s common to take a conservative approach to ensure that all animals are protected from sickness whenever possible. Still, it’s important to understand that some calves treated metaphylactically may not have succumbed to BRD. “That’s why producers and veterinarians need to work together to gain a better understanding of which calves need metaphylaxis, to ensure that treatments are utilized most effectively and prudently,” stated Dr. Gillespie.

Preconditioning or buying preconditioned calves will reduce the pool of high-risk cattle. “Data show that previously vaccinated cattle are at lower risk for developing BRD,1 which reduces the need for antibiotic therapy,” added Dr. Gillespie.

The first step in any targeted metaphylaxis program is to work with a veterinarian to develop a plan that objectively evaluates incoming cattle. “The plan should outline the exact criteria needed to select cattle for treatment,” said Dr. Gillespie. Typical selection criteria for metaphylaxis may include age and weight of cattle, length of transportation, weather conditions, environmental and nutritional factors as well as cattle origin.

Some operations may evaluate cattle using the DART assessment, which looks at four areas: Depression, Appetite, Respiratory rate and Temperature. “The criteria should be easy to implement on your operation and used consistently from one day to the next,” suggested Dr. Gillespie.

The growing importance of chute-side diagnostics

While clinical signs are commonly used to single out higher-risk calves, producers and veterinarians are searching for other chute-side diagnostics. “For calves, there’s already a lot of stress associated with processing,” Dr. Gillespie cautioned. “That’s why any additional chute-side diagnostics need to be quick — handling that animal for an extra few minutes could add stress.”

Researchers are exploring technologies that might catch subtle signs of illness before workers can, including ear tag accelerometers, pedometers that monitor animal movement, or feeding systems that follow feed intake. Other chute-side diagnostics currently being considered include electronic stethoscopes, blood tests and even a “smell test” that can identify compounds in nasal secretions.

Veterinarians can recommend an antibiotic for metaphylaxis that works best for a producer’s class of cattle. Typically, several factors should be evaluated, such as efficacy studies, spectrum of activity, speed of action and post-metaphylactic interval (PMI), or the length of time the antibiotic is at effective levels in the bloodstream before another dose is required.

Because a number of different bacteria can be involved with BRD, it’s important to choose a broad-spectrum antibiotic that reaches the lungs quickly. In some instances, producers may use antibiotics with unknown sensitivity (or those not proven effective against certain bacteria) for metaphylaxis, and save the more effective drug for treatment because it’s typically more expensive. “But using a less-effective class of antibiotics in the beginning can result in issues throughout the feeding period,” Dr. Gillespie warned. “That could cost a lot more in the long run than the money that was initially saved.”

Finally, every targeted metaphylaxis plan should also include a way to evaluate the success of the program. “Larger producers will often analyze morbidity data (or the number of re-treatments needed), total death losses and the case fatality rate,” said Dr. Gillespie. The case fatality rate is the total dead among treated animals divided by the total number of head treated, multiplied by 100.

This data can help determine the return on investment for targeted metaphylaxis, but it has other uses, too. “It’s important for producers and veterinarians to take what they learn from this data, and apply it to the next group of incoming cattle,” stressed Dr. Gillespie. “Incremental improvements can ultimately help boost the success of targeted metaphylaxis.”