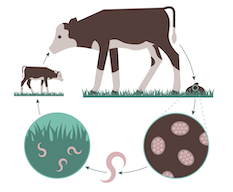 DULUTH, Ga. (May 21, 2020) — Ostertagia ostertagi is the most common and economically important parasite in cattle. Also known as the brown stomach worm, it is estimated to cost the U.S. cattle industry $2 billion per year due to lost productivity and increased operating expenses.1

Studies show that a brown stomach worm infection can reduce weight gain by up to 20 pounds, whereas milk production can see a decrease between 2 and 5 pounds per day.1

How do herds become infected?

Unlike other stomach worms, the brown stomach worm has the unique ability to penetrate the lining of the abomasum and become dormant, so it can survive during weather that’s too cold or too hot. When conditions improve, the larvae can emerge all at once, causing severe inflammation and irritation, reduced feed intake and sometimes even death.

Dr. Foulke breaks down the basic life cycle below:

Stocking density and weather conditions can influence the likelihood of this cycle continuing, and consequently the number of parasites present at any given time.

“Parasites place themselves in the best position to be ingested by cattle,” explained Dr. Foulke. “They try to stay at the top of the grass blades during the day, and migrate back down to ground level overnight.”

Studies have found that the climate at the base of the grass is very favorable for larval survival, and can harbor large numbers of parasite larvae. Some larvae migrated as far as 15 cm down into the soil, and were able to return to the surface for ingestion.1

Rainfall and other adverse weather conditions allow larvae to be more easily transported away from the fecal matter. In fact, a minimal amount of water can transport larvae up to 35 inches away from their original location.1

To best protect your herd from parasites, Dr. Foulke encourages producers to look for a weatherproof dewormer. A local veterinarian can help you determine the parasite load in your animals and on your pasture throughout the year, as well as adapt control methods to manage parasites in all weather conditions.

Are dairy herds at risk?

“Since the parasite life cycle typically revolves around pasture contamination, confined dairy operations may not view the brown stomach worm as a threat,” Dr. Foulke noted. “But we forget that many of these confined dairies will still put dry cows or calves and heifers on pasture. If animals see grass at any point in their life, they’ve likely been exposed to parasites like the brown stomach worm.”

Producers are encouraged to pay special attention to parasite control in replacement heifers, as they have significant nutrient demands on their bodies during the growing stages. Adding parasites to that equation can slow time to mature weight and conception, which gets them into the milking string late, and ultimately decreases lifetime milk production.

“Producers often ask about the best deworming protocol, but unfortunately, that answer is different for every farm,” said Dr. Foulke. “The way you’re going to deworm a dairy herd in the Northeast is going to be very different than deworming a stocker operation in Florida.”

To minimize the impact these parasites can leave on herd performance and profitability, Dr. Foulke advises both beef and dairy producers to work with their veterinarian to perform routine fecal tests on their cattle, and implement management protocols accordingly.