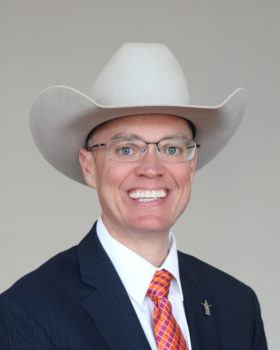 Chris Boleman, who has three degrees from Texas A&M, is the leader of the largest event of its kind in the world.

A Bryan native and Texas A&M University alumnus was recently named the head of the Houston Livestock Show and Rodeo. Chris Boleman ’96, a former Texas A&M AgriLife professor, also earned a master’s degree from the university in 2000 and a Ph.D in 2003.

Before Boleman became head of the livestock show and rodeo, he served as executive director of the Agricultural Educational Competitions and Exhibits Division, and helped reorganize the structure of the event. Before joining the HLSR, he was heavily involved with the Texas 4-H organization.

Below, Boleman shares information about the rodeo, his new job, and how it’s been affected by the coronavirus pandemic.

Q: What classes did you teach at Texas A&M?

Q: You come from a family of Aggies, is that correct?

Q: Can you give some quick stats on the HLSR?

A: Established as the Houston Fat Stock Show in 1932, the Houston Livestock Show and Rodeo has grown into the world’s largest event of its kind. The HLSR promotes agriculture by hosting an annual, family-friendly experience that educates and entertains the public, supports Texas youth, showcases Western heritage and provides year-round educational support within the community. Since its beginning in 1932, the rodeo has committed more than $500 million to Texas youth and education. In 2019, the rodeo drew more than 2.5 million visitors.

Q: What is the most fun part of this job, and what is the toughest?

A: The best part of the job are the great people I work with, the volunteers, staff, the whole team. They are awesome people fully committed to the Houston Livestock Show and Rodeo mission. The toughest part? Nothing yet, because I am still learning and loving all of it.

Q: It must have been very frustrating to be named head of the HLSR and have the entire event canceled because of the pandemic.

A: All of us at the Houston Livestock Show and Rodeo were deeply saddened to close early. However, the safety and well-being of our guests and our community is our top priority. We plan for 20 consecutive days, so without the remaining 12 days of grounds attendance and concert performances, the financial loss will be significant.

Q: Entertainment is a huge draw for the event. How are entertainers selected and who have been the most popular?

A: The entertainer lineup represents a wide range of musical genres. Each year, we strive to offer a star-studded lineup that reflects our country roots, as well as the diversity of our community.

The top three rodeo performances on the list of the Houston Livestock Show and Rodeo’s top 25 paid rodeo/concert attendance records include:

Q: Volunteers are a big part of the livestock show and rodeo. Can you give some details?

A: The Houston Livestock Show and Rodeo would not be the well-run success that it is today without the vision, dedication and hard work of its volunteers. The rodeo is powered by more than 35,000 volunteers and 135-plus full-time employees who work year-round to prepare for our annual event. Our total operating expenses were more than $146 million in 2019.

About the Houston Livestock and Rodeo:

The board of the rodeo has 18 vice presidents elected to one-year terms, and they supervise the activities of the rodeo’s more than 35,000 volunteers serving on 108 different committees. Each vice president may serve up to three terms.

In 1970, Elvis Presley performed at the Astrodome, and in 1990, former British Prime Minister Margaret Thatcher attended the event during an economic summit meeting in Houston

In 2002 the final rodeo was held at the Astrodome, and it was moved to what is now NRG Stadium.

In 2003 rodeo awarded more than $1 million in scholarships to Texas FFA and 4-H clubs.