Brent Crude oil prices average $113 in May, up $8 from the prior month

The June Short-Term Energy Outlook (STEO) is subject to heightened levels of uncertainty resulting from a variety of factors, including Russia’s full-scale invasion of Ukraine. Global macroeconomic assumptions in STEO are from Oxford Economics and include global GDP growth of 3.1% in 2022 and 3.4% in 2023, compared with growth of 6.0% in 2021. A range of potential macroeconomic outcomes could affect energy markets in the forecast period. Factors driving energy supply uncertainty include how sanctions affect Russia’s oil production, the production decisions of OPEC+, and the rate at which U.S. oil and natural gas producers increase drilling.

The Brent crude oil spot price averaged $113 per barrel (b) in May. We expect the Brent price will average $108/b in the second half of 2022 (2H22) and then fall to $97/b in 2023. Current oil inventory levels are low, which amplifies the potential for oil price volatility. Actual price outcomes will largely depend on the degree to which existing sanctions imposed on Russia, any potential future sanctions, and independent corporate actions affect Russia’s oil production or the sale of Russia’s oil in the global market.

We forecast Russia’s production of total liquid fuels will decline from 11.3 million b/d in the first quarter of 2022 (1Q22) to 9.3 million b/d in 4Q23. This STEO incorporates the recently announced EU ban of seaborne crude oil and petroleum product imports from Russia. We assume the crude oil import ban will be imposed in six months and the petroleum product import ban in eight months. This forecast does not reflect restrictions on shipping insurance, as details regarding such restrictions were not available when we finalized this forecast on June 2. The possibility that these sanctions or other potential future sanctions reduce Russia’s oil production by more than expected creates upward risks for crude oil prices during the forecast period.

At its June 2 meeting, OPEC+ announced an upward adjustment of production targets for July and August. We updated our forecast to reflect these targets. We expect OPEC crude oil production to average 29.2 million b/d in 2H22, up 0.8 million b/d from 1H22.

The U.S. average retail price for regular grade gasoline averaged $4.44 per gallon (gal) in May, and the average retail diesel price was $5.57/gal. Rising prices for gasoline and diesel reflect refining margins for those products that are at or near record highs amid low inventory levels. We expect the gasoline wholesale margins (the difference between the wholesale gasoline price and Brent crude oil price) to fall from $1.17/gal in May to average 81 cents/gal in 3Q22, and we expect retail gasoline prices to average $4.27/gal in 3Q22. Diesel wholesale margins in the forecast fall from $1.53/gal in May to $1.07/gal in 3Q22, and retail diesel averages $4.78/gal in 3Q22. 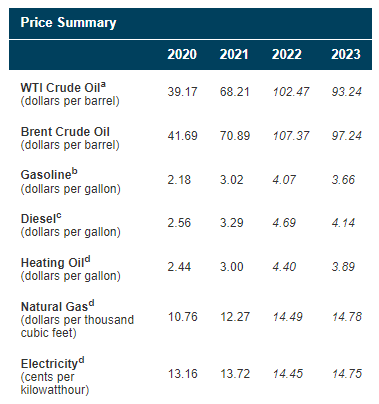 The largest increases in U.S. electricity generation in the next two years are likely to come from renewable energy sources, driven by expanded generating capacity from these sources. We expect renewable energy will provide 22% of U.S. generation in 2022 and 24% in 2023, up from a share of 20% last year. Solar capacity additions in the electric power sector total 20 gigawatts (GW) for 2022 and 22 GW for 2023. Solar PV installation delays from 2022 to 2023 account for about 1 GW of the expected installed solar capacity. We expect that small-scale (systems less than 1 GW) solar capacity will grow to a total of 39 GW by the end of 2022 and to 46 GW in 2023.We estimate that wind capacity additions in the U.S. electric power sector will total 11 GW in 2022 and 5 GW in 2023.

The continued retirement of coal-fired generating capacity in the United States contributes to our forecast that the share of electricity generation from coal will decline from 23% in 2021 to 21% in 2022 and to 20% in 2023. The coal fleet has been facing constraints in raising its share of generation despite high natural gas prices. The constraints include limited rail capacity for fuel delivery, low coal stocks at power plants, reduced coal mining capacity, and rising generation from renewable sources.

U.S. coal production in the forecast increases by 23 million short tons (MMst) (3.9%) in 2022 to 601 MMst and then declines by 13 MMst (2.1%) to 588 MMst in 2023. The forecast increase occurs despite our expectation that coal use in the electric power sector will decline. We expect rising coal production will replenish electric power sector inventories and contribute to U.S. coal exports.

e expect energy-related carbon dioxide (CO2) emissions in the United States to increase 1.3% in 2022 and fall by 0.7% in 2023. Forecast emissions increases in 2022 primarily reflect growth in transportation demand.