Any cow calf producer that has spent several years in the cattle business has had the experience of assisting a cow or heifer deliver a calf that was coming backwards.   Research from the Ft. Keogh experiment station in Montana with over 13,000 calvings in 15 years suggests that 1.6% of all deliveries were backwards (Patterson, et al.,1987 Therio. vol 28 no. 5).  Understanding the physiology and anatomy of the calf and mother will improve the likelihood of a successful outcome.  Study the illustration of the “posterior presentation” shown below. 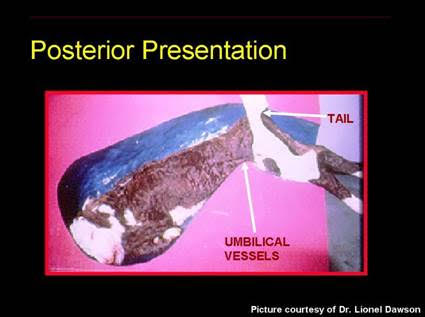 At this point, the head of the calf is still in a fluid-filled sac.  If the umbilical cord is totally pinched by the pelvic rim, the calf can only survive for about four minutes.  Therefore it is necessary to deliver the calf quickly and get it started breathing immediately.

Certainly, if a producer does not feel confident in their abilities to deliver the backward calf, call your veterinarian immediately.  Time is of the essence.  As producers examine heifers or cows at calving and find a situation where the calf is coming backward, they need to keep this 4 minute guideline in mind.  If the calf’s hips are not yet through the pelvic opening, they have a little time to locate help and have someone else to aid in the assistance process.

Once the cow and the producer in concert have pushed and pulled the calf’s hips through the pelvic opening and the tailhead is apparent, the calf needs to be completely delivered as quickly as possible.  The remainder of the delivery should go with less resistance as the hips are usually the toughest part to get through the pelvic opening.  The shoulders may provide some resistance.  However, some calf rotation and traction being applied as the cow strains will usually produce significant progress.  Remember, the completion of the delivery is to be accomplished in about 4 minutes or less.  The calf’s head and nostrils are in the uterine fluids and cannot breathe until completely delivered.  The calf must get oxygen rapidly to offset the hypoxia that it is been subjected to during the delivery.  After the calf is delivered,  clean the mouth and nostrils of fluids and tickle it’s nostrils with a straw to cause snorting and inhalation of air to get it started to breathing.

If upon examination you find a “breech” presentation (with only tail and buttocks but no hind legs) call your local large animal veterinarian immediately.  The Montana data indicates that 0.6% of all calvings are breech presentations.  Breech presentations often require C-sections for a successful outcome.  Download and read Oklahoma State University extension bulletin E-1006, Calving Time Management for Beef Cows and Heifers.

Oklahoma State University, in compliance with Title VI and VII of the Civil Rights Act of 1964, Executive Order 11246 as amended, Title IX of the Education Amendments of 1972, Americans with Disabilities Act of 1990, and other federal laws and regulations, does not discriminate on the basis of race, color, national origin, sex, age, religion, disability, or status as a veteran in any of its policies, practices or procedures. This includes but is not limited to admissions, employment, financial aid, and educational services.  References within this publication to any specific commercial product, process, or service by trade name, trademark, service mark, manufacturer, or otherwise does not constitute or imply endorsement by Oklahoma Cooperative Extension Service