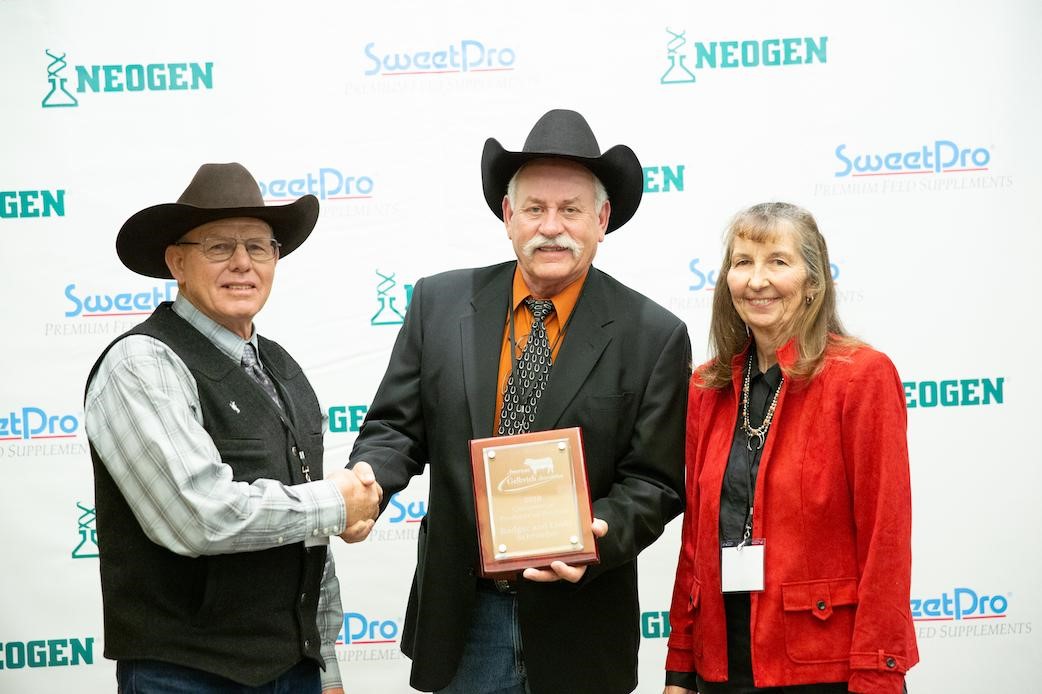 The American Gelbvieh Association named Rodger and Lindy Schroeder of Chugwater, Wyo., the AGA Commercial Producer of the Year for 2019. Rodger (left) and Lindy Schroeder (right) were presented the award by AGA board member, Jeff Swanson, Oxford, Neb. (middle).

Rodger and Lindy Schroeder of Chugwater, Wyoming, were honored as the American Gelbvieh Association's (AGA) Commercial Producer of the Year

for 2019 during the awards banquet held at the 49th Annual AGA National Convention in Billings, Montana.

Rodger and Lindy were present at the AGA awards banquet to accept the award. Jeff Swanson, an AGA board member from Oxford, Nebraska, presented the couple with the award.

Rodger and Lindy have a family history that is rich with Western culture. The ranch was started in 1881 when Lindy's great-grandfather came to Wyoming from Scotland in search of a prosperous life. Today, the family operation is split between Lindy and her two sisters. The Schroeder family runs Balancer cattle and has been very successful.

The Schroeders bought their first Gelbvieh bull out of the pens in The Yards at the National Western Stock Show in 1981. Rodger said they "like the Gelbvieh

for their milk, their meat, their disposition, and their structure." Starting out with an almost purebred Gelbvieh herd, Rodger and Lindy found that Balancer cattle were the best fit for their program.

The Schroeder family has put together a great program in southeastern Wyoming. They have invested a lot of hard work into creating a place that sets a great example for others living the ranching lifestyle. With the deep family heritage and the strong passion for ranching, their ranch will surely carry on well into the future.