If you’ve successfully synchronized and artificially inseminated beef heifers and/or cows in recent years, the synchronization protocol you utilized undoubtedly contains the fingerprints of two research pioneers who worked tirelessly for decades to make controlling the estrous cycle easier than ever before. These giants in the field dedicated their careers to the beef cattle industry, understanding that faster genetic progress through A.I., along with getting more calves born early in the calving season, were critically important to producer profitability. By developing better synchronization techniques and tools, it has now become commonplace to see pregnancy rates of 55% to 65% following synchronization and timed A.I. 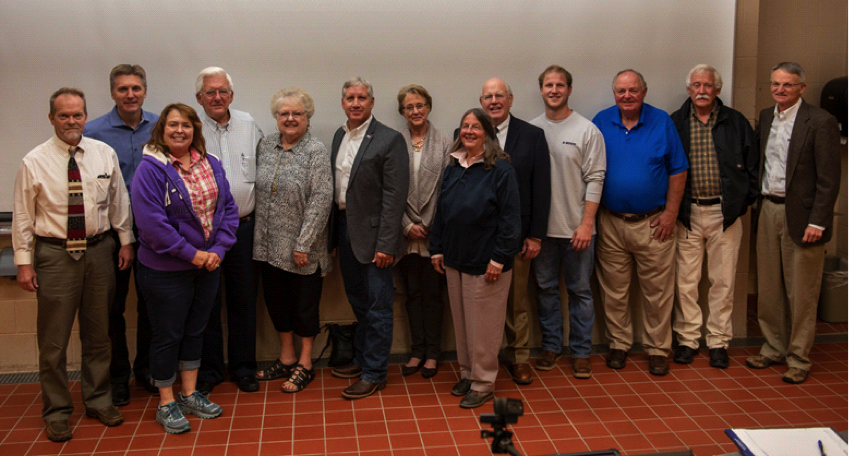 Dr. Guy Kiracofe (pictured fourth from the left), is an emeritus professor of reproductive physiology at Kansas State University. Kiracofe was born in Mt. Solon, Virginia. He received his B.S. and M.S. degrees from Virginia Polytechnic Institute in 1958 and 1960, respectively. He received his Ph.D. from Kansas State University in 1965, and then spent one year on a postdoctoral fellowship at the University of Kentucky.

He served on the faculty of K-State (1966-1991) and the University of Kentucky (Animal Sciences Department Head from 1991-2000). Kiracofe taught courses related to farm animal reproduction and beef science. He won the top awards given by K-State for both excellence in undergraduate teaching and student club advising. A total of 13 Ph.D. and 22 M.S. degrees have been awarded under his direction. His research was among the first to demonstrate several physiological interrelationships that contribute to success of synchronization of the estrous cycle, including the impact of day of the cycle when synchronization treatment is initiated. These important discoveries were foundational to modern day protocols that are more effective regardless of stage of the cycle at treatment onset.

Dr. Kiracofe and his wife, Doris (pictured to his immediate right), have two children and five grandchildren. Son Kent is pictured second from the left.

Dr. David Patterson (pictured fifth from the left, with his wife Mary standing in front of him) is a professor of animal sciences in the College of Agriculture, Food and Natural Resources at the University of Missouri. Dr. Patterson earned his B.S. and M.S. degrees from Montana State University in 1976 and 1979, respectively. He later traveled to Manhattan, Kansas, earning his Ph.D. in animal science from K-State in 1984.

Dr. Patterson served on the faculty at the University of Kentucky after finishing his Ph.D. until 1996 and then moved to the University of Missouri where he has served in the animal science department for the past 23 years. Dr. Patterson has improved the reproductive efficiency of beef herds in the Midwest through the increased use of various reproductive technologies. He’s been a leader in timed A.I. and in developing synchronization protocols capable of producing higher conception rates using fixed-time A.I.

Dr. Patterson may be best known for co-creating a heifer development protocol that became Missouri’s Show-Me-Select Heifer Replacement program (SMS). With the assistance of auction markets, veterinarians and Extension specialists across the state, producers gradually adopted proven methods of reproductive management to reach SMS benchmarks. The SMS program has elevated the quality of Missouri’s cattle population and stands as a prime example of the success that can be achieved when producers, academics, veterinarians and Extension specialists work together to achieve a common goal.

Dr. Patterson and his wife have two sons. Ian Patterson is pictured standing fourth from the right.

Red Angus salutes these two champions of beef cattle reproduction! Their many positive impacts on the cow-calf business and the industry will continue for many decades to come. Thanks Guy and Dave, we really appreciate all you’ve done.

Editor’s note: The accompanying photograph was taken in Weber Hall on the K-State campus on October 9, 2019, at the Kiracofe Physiology Lecture Series. Dr. Dave Patterson provided the presentation for this event, which was the final installment in the series which began in 1991. Mary Ann Kniebel, Red Angus breeder from White City, Kansas (pictured third from the left), and Tom Brink, RAAA CEO (sixth from the left), both earned master’s degree’s under Kiracofe’s direction in the middle 1980s and were on hand for the meeting.