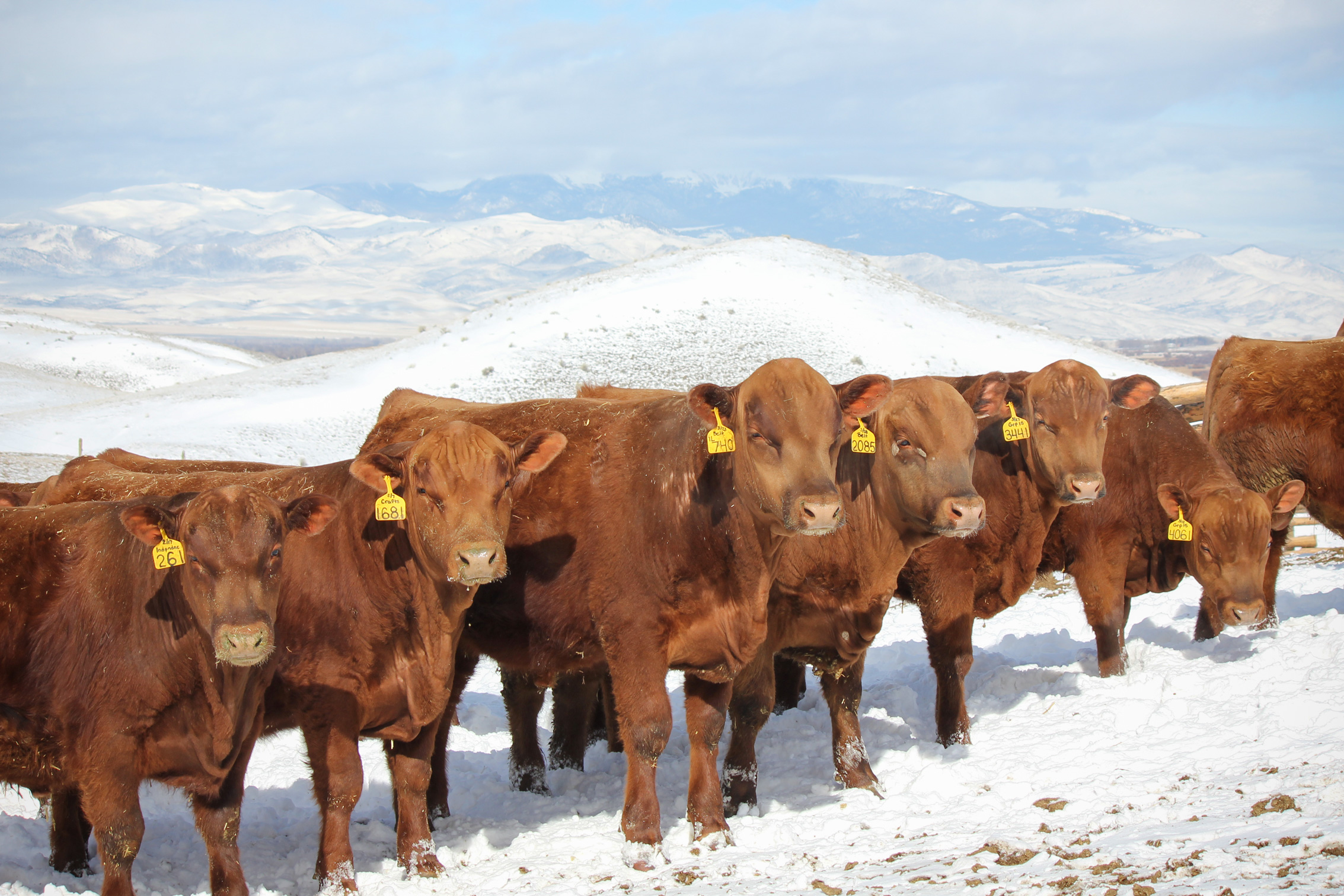 5L Red Angus is a seedstock operation that is the size of a relatively large commercial herd.  Each spring we breed nearly 2000 females, and then pair those cattle out to grass that can can spread from West Yellowstone to Great Falls to the plains of eastern Montana.

We “winter out”; by the first of December, most of our cows are 70 miles South of5L Headquarters eating brown, dead standing forage.  We see them once a week to supplement protein and have not hauled one bale of hay to those cattle over the past 4 years.  You need to see those cows in late January, with their nose covered in snow, their mouth full of last summer’s grass and their back holding a body condition score of 5+ to really appreciate what 5L is all about.

We breed over 500 heifers annually.  We’re much smarter cattlemen when we select females after they’ve bred, calved unassisted, rebred on time and weaned a calf.  This also improves the validity of our data by removing selection bias from important traits such as Heifer Pregnancy, Maternal Calving Ease, and Stayability.  We believe simultaneously testing our cowherd against the environment while making them compete against a full strength regiment of our most advanced genetics ultimately results in supplying our customers with the genetics that give them the best opportunity for cowherd profitability.

While much of our selection has focused on eliminating costly failures in the cowherd, we have a substantial R&D project to identify the genetics of enhanced feeder calf value.  In addition to feeding our own cattle, in 2015 we were part of an progeny testing alliance that mated over 700 cows in structured progeny tests to collect, phenotypes for weight traits, gain, and intake and carcass traits.  More recently, we’ve invested in a GrowSafe system large enough to capture individual intake and calculate feed conversion on every bull marketed at 5L – plus, the bulk of our replacement females.  The price of this R&D is scary!  But it is small compared to our commitment to providing bulls that build hi-value reputation calf crops for our customers.

The brand, 5L, represents a family of five L’s—Lawrence, Lillian, Larry, Linda and Lenny Mehlhoff. Descending from a long line of farmers and ranchers, 5L Red Angus began raising Red Angus cattle in the late 1970s in North Dakota. Previously, they raised registered Shorthorns and commercial cattle. In 1977, they purchased a few registered Red Angus and moved to Paradise Valley, south of Livingston, Montana in 1979. In 1979, they purchased the Centurion Cattle Co. Red Angus herd from Nebraska. Their son, Larry purchased some Red Angus females after graduating from high school in 1979 and started his own herd of reds. When Lawrence was forced to sell out in 1985, Larry purchased some of his cattle as well. Since then, Larry has expanded using an extensive A.I. program and retaining most of the heifer calves.

The five L’s have now grown to seven L’s in the second generation. Larry married Lisa Stands in Paradise Valley in 1983, and they now have the five L children—Laramie, Larisa (married to Zach Oldenburger in 2014), Landon (married to Amy Shibe in 2012), Larinda (married to David Aborn in 2015), and Logan. Most of them play a very vital part of the ranch operation, working in all phases of it, from haying and irrigating to all aspects of the cattle work.

Thank you for your interest in 5L Red Angus! If you would like more information about our cattle please feel free to contact us anytime at 406.842.5693.