Compared to last week, steers and heifers sold 1.00 to 5.00 lower.  Warmer weather across the Plains this week brought the swather out of the barn and into the field as hay producers are quick to get in the fields as soon as it dries up enough.

Temperatures in the 90+ range has made it seem like many areas are moving from early spring to late summer all in one fell swoop.  Market reporters noted this week’s offering were feeling the effects of the first hot spell of the year.

Auction Receipts lagged behind a year ago by 50K as analysts are scrutinizing the number of placements in May and June due to the unusually large placement number in April.

Traders continue to watch the direction of corn and soybean market as corn prices will remain uncertain and continue to be so for the rest of the growing season.

The CME Cattle Complex suffered harsh losses last Thursday and Friday, then recovered about half of those losses Tuesday and Wednesday this week.

This week was shaping up to get a significant portion of the losses back, however today Feeder Cattle futures closed over 2.00 lower on the day.  For the week, August Feeder Cattle was 4.13 higher, while the deferred months were 2.17 to 3.28 higher on the week.

Weekly Live Cattle futures felt the pressure of the cash trade and the delivery month June closed 1.55 lower at 106.92.  The deferred months were 0.23 to 1.40 higher for the week.

Negotiated cash fed cattle trade started Monday in the Southern Plains with fed cattle prices mostly 2.00 lower at 113.00 with trade in Northern Plains on Thursday at 114.00.  Despite some good gains this week in the cattle futures last week’s sharp break and plentiful supplies with seasonal weakness coming for the summer months still paints a bearish attitude.

Cattle Slaughter under federal inspection estimated at 662K for the week, 80K more than last week (holiday week) and 1K more than a year ago. 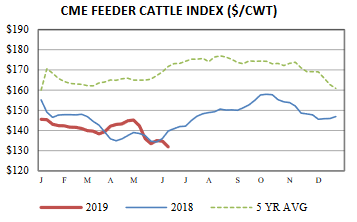