The 40-minute film, available for viewing at CattleFirstMovie.com, follows the Johnson family’s experiences as cow-calf producers, and provides perspectives on all aspects of ranching. Family members share their philosophies on progressive land management and the health and well-being of their animals.

“Ranching isn’t just a business, it’s a way of life,” said Will Johnson of Flying Diamond Cattle Ranch. “We’re honored to be featured in this documentary by Boehringer Ingelheim, and believe that putting cattle first is one of our guiding principles — our livelihood depends on it.”

The Johnsons are raising a sixth generation on the eastern and central plains of Colorado. They’re raising cattle, too, in much the same way that the family raised them in the early 1900s: allowing them to graze in the sweeping pastures that support efficient breeding, while employing the latest techniques in animal healthcare.

“Our multi-generational history means a lot to us, but we still face challenges from the public perception of what it means to be a rancher,” said Johnson. “We’re passionate about producing safe, high-quality beef for consumers, and want to show them our commitment to it.”

The documentary premiered at the 2020 Cattle Industry Convention in San Antonio, and is now available to view at CattleFirstMovie.com. It will also be screened at National Ag Day in Washington, D.C., on March 24.

The film is brought to you by Boehringer Ingelheim. “We are dedicated to helping the cattle industry improve the health and well-being of its animals, to ensure it remains successful for generations to come,” said Scott King, DVM, director of cattle marketing, Boehringer Ingelheim. “We’re proud to feature a ranch that embodies our company’s Cattle First philosophy while encouraging others to do the same.” 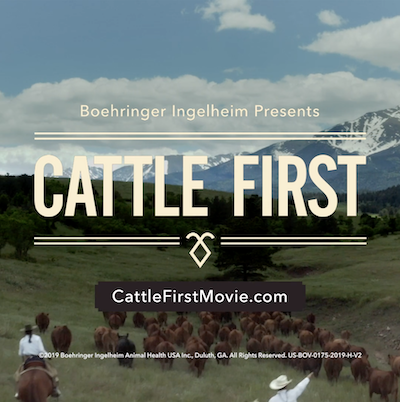