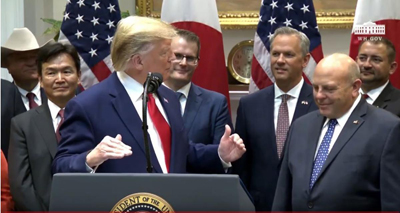 NCGA President Kevin Ross today joined leaders of other farm and commodity groups at the White House to commemorate the signing of the U.S.-Japan Trade Agreement. The agreement secures the second largest export market for corn farmers. Ross made the following statement.

"Japan is the number two buyer of U.S. corn, purchasing more than $2 billion in the most recent marketing year. This is a high value market for our livestock industry, therefore, also a major purchaser of U.S. corn through exported meats.

*NCGA has been a long-time supporter of trade with Japan. With many farmers struggling amid some challenging times, this is some much-needed good news. This agreement reaffirms and builds on our trading relationship with Japan and NCGA looks forward to continued work for a successful Phase 2 of these important negotiations."