With waves of precipitation hitting the U.S., almost every region saw improvement or at least status quo—with the exception of the Southern Plains. That said, there is still a lot of drought in the U.S. As of January 24, 2023, 36.0% of the U.S. and Puerto Rico and 42.99% of the lower 48 states are in drought, according to the U.S. Drought Monitor.

Over the past few weeks, a series of atmospheric rivers brought significant amounts of rain and snow across parts of the West leading to improvements in soil moisture, streamflow, reservoirs levels and snowpack. This above-normal precipitation led to abnormal dryness and drought improvements in California, the Pacific Northwest, Great Basin and the central Rockies. Despite these improvements, long-term drought persists across much of the West. In the eastern United States, winter storms brought cooler temperatures and above-normal precipitation from the Mississippi Valley to the East Coast, leading to abnormal dryness and drought improvements in the Midwest, Northeast and Southeast. Meanwhile, persistent dryness led to the expansion of drought in the southern Plains and northern Rockies, while much of the Southern and High Plains regions remain largely unchanged. 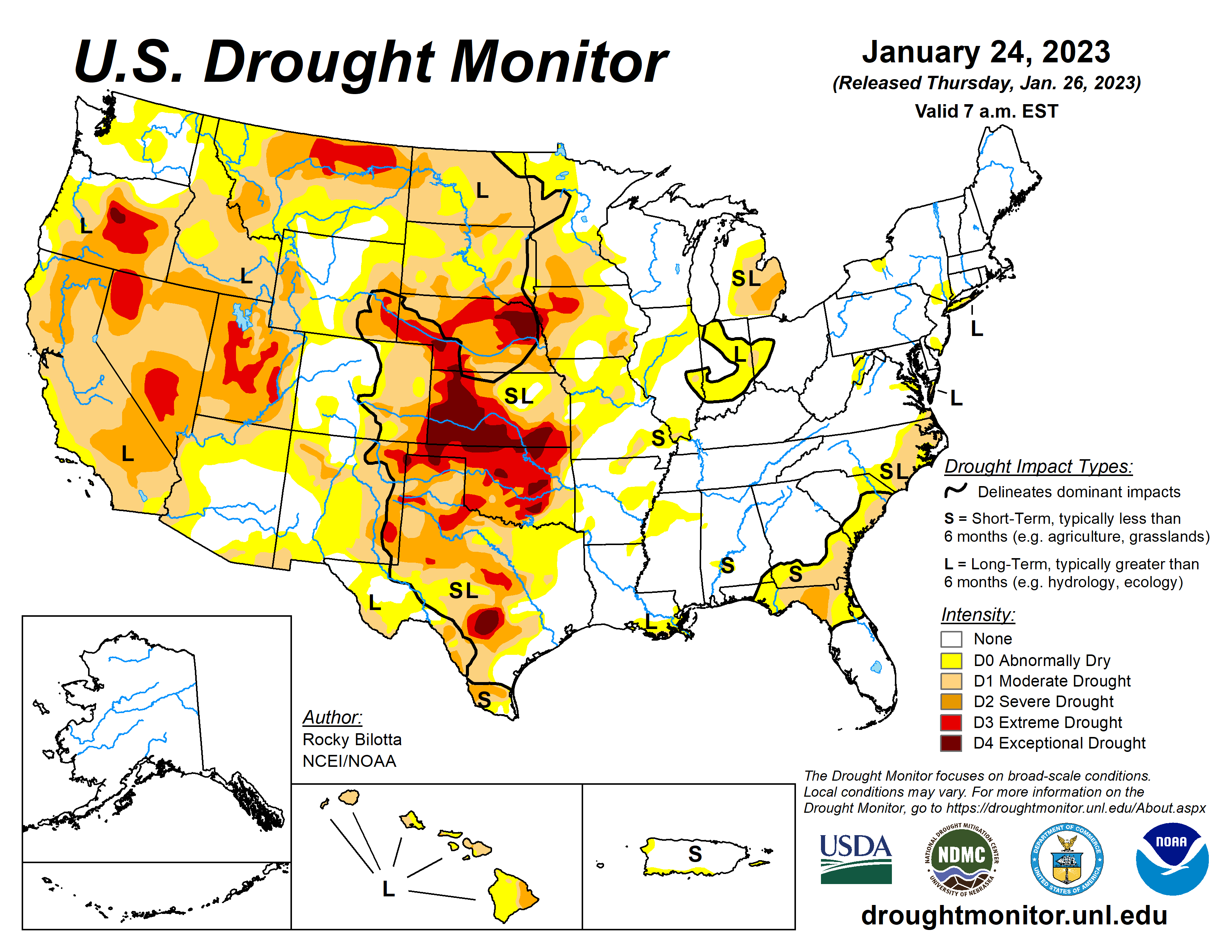 A winter storm brought snow and rain to the region this week. A half of an inch or more of rain fell across much of the Northeast with two inches or more falling over parts of southern New England. The rain was enough to remove abnormal dryness (D0) conditions from Massachusetts, including Cape Cod, southern New Hampshire and western Connecticut. Much of the Northeast remains drought-free except for lingering long-term moderate (D1) drought across eastern Long Island, New York.

Precipitation fell across much of the South, halting most degradations or improvements this week. Up to two inches of precipitation fell from central Louisiana to southern Mississippi while much of Texas and Oklahoma received less than half an inch of rain. Precipitation over parts of southeast Oklahoma and eastern Texas were below normal, resulting in the expansion of abnormal dryness (D0) in this area. Severe (D2) drought and abnormal dryness was expanded in southern Texas in response to below-normal precipitation, declining streamflow and drying soils.

The Midwest was hit with another week of above-normal precipitation. A band of heavy precipitation fell from southeast Missouri to northeast Ohio with some areas receiving up to 400% of normal. Recent rainfall, cooler temperatures and rising streamflow led to improvements to moderate (D1) drought and abnormal dryness (D0) in Missouri, Illinois, Indiana and Ohio this week.

A half an inch or more of precipitation fell across parts of Kansas, eastern Colorado, southeast Wyoming and Nebraska. Parts of northwest Nebraska, western Colorado, Wyoming, South Dakota, and Montana received less than half an inch of precipitation. Moderate to extreme (D1-D3) drought and abnormal dryness (D0) was contracted in Kansas, Colorado and Wyoming where snowpack is above normal and soil moisture conditions are improving.

Half of an inch or more of precipitation fell in the Coastal and Cascade ranges of the Pacific Northwest, and southern Rockies while more southerly parts of the West, from southern Nevada to southern Arizona, received no precipitation. Moderate to severe (D1-D3) drought and abnormal dryness (D0) were trimmed in Washington, Oregon, Idaho, California, Nevada, Utah, and New Mexico. Extreme drought shrank in southern Oregon, Nevada and Utah. Some of the drought contraction was due to drought indicators showing slightly less severe conditions. In California, improvements were made based on multiple weeks of above normal precipitation and improving reservoirs, streamflow and indicators. In the drier areas of the West, severe drought was expanded in western Montana while moderate drought was expanded in eastern New Mexico. In Utah, much of the state has above normal snowpack but few improvements were made this week based on the current issues with groundwater and depleted reservoirs.

The National Weather Service Weather Prediction Center has forecasted a winter storm (valid January 25 – January 26) that will track through the eastern Great Lakes overnight. Bands of heavy snow are expected over northern New York and New England. A second area of low pressure will develop over Southern New England and move into the Gulf of Maine by early Thursday where over 10” of snow is forecasted for interior locations. Moving into next week (valid January 28 – February 1), the forecast calls persistently cold temperatures from the northern/central Rockies into the Upper Midwest, while the West will trend colder. the Southeast on the warmer side of normal, especially after the weekend. At 8 – 14 days, the Climate Prediction Center Outlook (valid February 2 – February 8) calls for below-normal temperatures over most of the country except for the Southeast and Alaska. Parts of the Northeast, southern Southwest and central Alaska can expect near-normal temperatures, while parts of the Southeast and western Alaska have the greatest probability of warmer-than-normal temperatures. Most of the U.S. can expect near- to slightly above-normal precipitation with the probability of near-normal precipitation occurring from the northern Plains to the Northeast and from southern California to the southern Plains, including western and southeast Alaska. Southern parts of the Southwest and Alaska have increased odds for below-normal precipitation.