There were many drought improvements this week as storms hit most regions of the United States, particularly Texas and the South/Southeast. Meanwhile, isolated parts of the Midwest and Southeast saw degradations. As of November 29, 2022, 48.10% of the U.S. and 57.51% of the lower 48 states are in drought, according to the U.S. Drought Monitor.

This U.S. Drought Monitor (USDM) week saw areas of moderate to heavy rainfall along the central and western Gulf Coast region as well as areas further inland in the eastern half of Texas, southeastern Oklahoma, and southwestern Arkansas. In these areas, targeted improvements were made in drought-affected areas. Additionally, an outbreak of severe weather, including severe thunderstorms with tornadoes and wind damage, impacted areas of the South (Louisiana, Mississippi, and Alabama) overnight on Tuesday (Nov 29), resulting in severe damage and loss of lives reported. In the Southeast, isolated heavy rainfall accumulations led to improvements on the map in areas of Alabama, Georgia, and North Carolina. Elsewhere in the Southeast, short-term dryness over the past 90 days led to expansion of areas of severe drought in the Florida Panhandle, where rainfall deficits ranged from 3 to 9+ inches. In the Northeast, only minor changes were made on the map in areas of eastern Massachusetts and Rhode Island in response to precipitation shortfalls during the past 30–60-day period as well as below-normal streamflow activity and lack of groundwater recharge in areas of Cape Cod. In the Midwest, areas of moderate drought expanded in southern Michigan and northern Illinois where short-term precipitation deficits are negatively impacting soil moisture and streamflow levels. In the High Plains, generally dry and warmer-than-normal temperatures (2 to 10+ deg F above normal) prevailed across much of the region during the past week. Out West, drought-related conditions improved in areas of Arizona, New Mexico, Nevada, Washington, Colorado, Wyoming, and Montana. In terms of snowpack conditions in the region, the Natural Resources Conservation Service (NRCS) SNOTEL network is currently reporting the following region-level (2-digit HUC) snow water equivalent (SWE) percentages of median for the date (Nov 29): Pacific Northwest 134%, California 135%, Great Basin 157%, Lower Colorado 152%, Upper Colorado 98%, Rio Grande 76%, Arkansas-White-Red 66%, Missouri 101%, and Souris-Red-Rainy 81%. Looking back at the last several months, the contiguous U.S. experienced its 8th warmest September-October period on record since 1895 in terms of average temperatures (+2.2-deg F anomaly) and maximum temperatures (+2.6 deg F), according to NOAA National Centers for Environmental Information (NCEI). Precipitation in the contiguous U.S. during the September-October 2022 period ranked as the 11th driest (-1.14-inch anomaly). 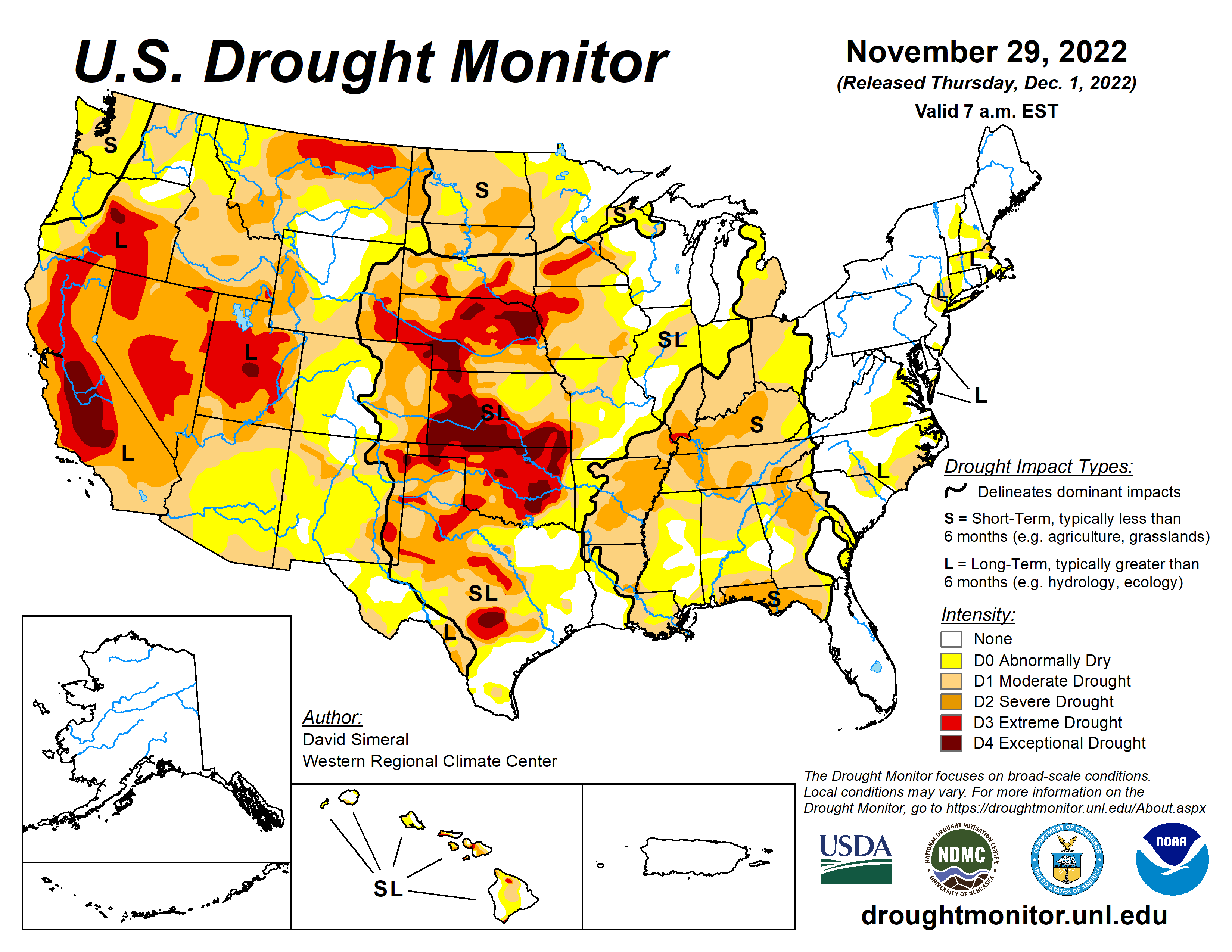 Northeast
Some minor changes were made on the map in eastern Massachusetts in response to a combination of factors including lingering groundwater recharge issues, low stream flows, and pockets of below-normal soil moisture. In Cape Cod, the USGS stream gauge on the Herring River at North Harwich was reporting flows in the 2nd percentile on November 29, according to the U.S. Geological Survey (USGS). Similarly, an area of Abnormally Dry (D0) was introduced in Rhode Island where numerous gauging stations were reporting below-normal levels ranging from the 10th to the 23rd percentile. During the past week, precipitation accumulations (liquid) were generally light (<1.5 inches) with modest snowfall accumulations observed in Upstate New York as well as northern portions of Vermont, New Hampshire, and Maine. According to the NWS National Operational Hydrologic Remote Sensing Center (NOHRSC), the Northeast Region (Nov. 29) had an average snow depth of 1.6 inches with a maximum depth of 18.2 inches. In terms of climatological rankings for the past several months, precipitation in the Northeast Climate Region was above normal (top 1/3rd at 34th wettest on record) for the September-October period, with Rhode Island recording its 10th wettest on record (+4.89-inch anomaly), according to NOAA NCEI. Also, noteworthy for the region, the August-October period was the 13th warmest (+2.4-deg F anomaly) on record and at the statewide level Maine saw its 5th warmest September-October on record (+3.7-deg F anomaly).

Southeast
During the past week, light-to-heavy rainfall accumulations (1 to 6+ inches) were observed across the region including an outbreak of severe weather on Tuesday evening (Nov 29) into Wednesday morning with numerous tornadoes reported across areas of Alabama, Mississippi, and Louisiana. This week’s precipitation led to improvements on the map in areas of Abnormally Dry (D0) and Moderate Drought (D1) in the southern half of Alabama and isolated areas of Georgia. In contrast, low streamflows, dry soils, and short-term precipitation shortfalls led to an introduction of Severe Drought (D2) in northern Alabama. Elsewhere in the Southeast, improvements were made in the Piedmont region of North Carolina where 2 to 3 inches of rain was observed this week. Conversely, areas of Moderate Drought (D1) expanded along the southern coast of North Carolina in response to short-term precipitation deficits over the past 30 days, dry soils, and reports of some low groundwater levels. For the week, average temperatures were above normal across the region with the greatest departures (6 to 10 deg F above normal) observed in southern portions of the region in Alabama, Georgia, South Carolina, and Florida. According to NOAA NCEI, average temperatures in the Southeast Climate Region were below normal during October (-1.9 deg F anomaly), while the past 12-month period (Nov 2021-Oct 2022) was the 11th warmest on record (+1.7-deg F anomaly). In terms of notable precipitation rankings, Florida saw its 8th driest October on record (-2.45-inch anomaly).

South
In the South, improvements were made across areas of the eastern half of Texas, southeastern Oklahoma, western Arkansas, and southern Mississippi where locally heavy rainfall accumulations (3 to 8+ inches) were observed. Despite this week’s rainfall in portions of Texas, streamflows in the Hill Country remain below normal with numerous gauging stations reporting levels in the bottom 10th percentile, according to the USGS. In terms of reservoir storage in Texas, monitored water supply reservoirs statewide are currently 69.9% full, according to Water Data for Texas. Some low reservoir storage levels are currently being observed in the western half of the state, including at Medina Lake (west of San Antonio) which is currently 6.7% full. According to NOAA NCEI, the South Climate Region experienced its 13th driest (-2.34-inch anomaly) September-October period on record, with Louisiana observing its 6th driest (-4.35–inch anomaly) for the contemporaneous period.

Midwest
For the week, precipitation accumulations ranged from light to moderate (1 to 4 inches) with the heaviest accumulations observed in western Missouri as well as in isolated areas of central Kentucky and northern Indiana. Additionally, some light-to-moderate snowfall accumulations were observed across portions of Minnesota, northern Wisconsin, and Upper Peninsula Michigan. The heaviest accumulations (6 to 8 inches) were observed in areas near Lake Superior. On the map, precipitation this week led to improvements in Ohio, Indiana, and Missouri, while conditions deteriorated in southern Michigan and northern Illinois where areas of Moderate Drought (D1) expanded. In southern Michigan, numerous streams and rivers were reporting below-normal flows including on the Red Cedar River near Williamston, Michigan (east of Lansing, MI) where current flows are in the 7th percentile, according to USGS. Looking at the regional snow analysis from NOAA NOHRSC, the Northern Great Lakes Region is currently 29.4% snow-covered with an average depth of 1.2 inches and a maximum depth of 18.4 inches. In terms of climatological rankings, the Upper Midwest Climate Region had its 6th driest (-2.25-inch anomaly) September-October period, with Minnesota having its 3rd driest (-2.68-inch anomaly) for the contemporaneous period.

High Plains
On this week’s map, improvements were made on the map in the greater Denver-Boulder area of Colorado and in portions of eastern Wyoming in response to above-normal precipitation in the short-term. Elsewhere in the region, no changes were made on the map. For the week, average temperatures were well above normal across the Northern Plains with average temperatures ranging from 2 to 10+ deg F above normal. However, the warmer temperatures melted the portions of the snow in areas of North Dakota allowing for beneficial percolation of meltwater into the still-unfrozen soils. According to NOAA NCEI, the Great Plains Region saw its 9th warmest (+3.0-deg F anomaly) and 8th driest (-1.4-inch anomaly) September-October on record. Statewide, Wyoming experienced its 3rd warmest (+4.2-deg F anomaly) and Colorado its 8th warmest (+3.1 deg F anomaly) September-October period on record.

West
Out West, some minor changes were made on the map in southeastern Arizona, southern New Mexico, east-central Nevada, and north-central Montana. In east-central Nevada, areas of Extreme Drought (D3) were reduced in White Pine County in response to improving conditions following above-normal precipitation during the monsoon season as well as from above-normal SWE levels currently observed in the Schell Creek and Snake ranges. Likewise, in southeastern Arizona and southwestern New Mexico, above-normal precipitation during the monsoon season as well as over the past several months led to the removal of areas of Severe Drought (D2). Further to the north in Montana, above-normal precipitation since the beginning of the Water Year (Oct 1), led to reduction of areas of Extreme Drought (D3). In terms of snowpack conditions across the region, near-normal to above-normal SWE levels are being reported across the basins of the Sierra Nevada, Great Basin ranges, Cascades, Northern Rockies, Wasatch, and areas of the Central Rockies. Further south, the basins of Southwest Colorado and the Rio Grande are currently below normal. For the week, average temperatures continued to be cooler than normal (2 to 10 deg F below normal) across much of the region except for areas of Northern California, Montana, and eastern portions of Colorado and Wyoming. Overall, much of the region was dry this week, however, some significant snowfall accumulations were observed in Pacific Northwest mountain ranges including the Olympics, Cascades, and Blue Mountains of northeastern Oregon. Likewise, snowfall was observed this week in the Wasatch Range as well as the Northern and Central Rockies, with additional mountain snow forecasted to impact areas of the West this week. According to NOAA NCEI, the September-October 2022 period was the warmest (+4.3-deg F anomaly) on record for the Rockies and Westward Region, 3rd warmest for the West Climate Region (includes California and Nevada) (+4.8-deg F anomaly), and warmest on record for the Northwest Climate Region (+5.5-deg F anomaly).

Looking Ahead
The NWS WPC 7-Day Quantitative Precipitation Forecast (QPF) calls for moderate-to-heavy precipitation accumulations (including heavy snowfall accumulations) ranging from 2 to 5+ inches (liquid) across much of the Cascades of Oregon and Washington, Klamath Mountains, Coast Ranges of Northern California, and the Sierra Nevada Range. In the Intermountain West, 1 to 3+ inch (liquid) accumulations are expected in central and northern Idaho ranges as well as in the Teton Range of Wyoming. Elsewhere in the conterminous U.S., heavy precipitation accumulations are expected in Kentucky and Tennessee (3 to 5+ inches liquid) as well as in areas of the Northeast including New York, New Hampshire, and Maine. The CPC 6-10-day Outlooks call for a moderate-to-high probability of above-normal temperatures for the South, Southeast, and Mid-Atlantic regions, while much of the West, Plains, and Midwest are expected to be cooler than normal. Precipitation is forecasted to be above normal across the Pacific Northwest, Northern California, and across much of the Eastern Tier. Below-normal precipitation is expected in Florida.