Four Ways to Reduce Parasite Resistance on Your Operation

DULUTH, Ga. (July 14, 2021) — “We cannot continue to rely on today’s deworming products to solve all parasite problems, because parasite resistance is real and it’s going to outpace the development of new cattle dewormers,” said Ray Kaplan, DVM, University of Georgia.

As scientists continue researching the possibility of new parasiticides, the cattle industry must look for ways to preserve the efficacy of those already on the market.

“You used to be able to administer a dewormer, and regardless of whether cattle got the full dose or not, or if it was administered incorrectly, worms were so susceptible to the product that it didn’t matter,” said Dr. Kaplan. “As parasites continue to evolve and become resistant to dewormers, adhering to deworming best practices will be more important than ever.”

Implementing a more sustainable deworming program on your operation can lead to increased herd productivity, reduced risk of parasite resistance and lasting dewormer efficacy. To achieve these benefits, Drs. Kaplan and Step encourage producers to work with a local veterinarian to implement four key protocols:

1) Diagnostic testing. Performing routine diagnostic tests will help you assess the effectiveness of your deworming program and determine the number of animals to leave untreated. Your veterinarian can advise you on the proper method, assist you with conducting these tests and help decipher test results.

2) Combination treatment. Using two dewormers from different drug classes has been proven to reduce fecal egg counts in cattle herds by nearly 99%.1 When high efficacy like this is achieved, there are also fewer resistant parasite survivors to cause trouble down the road.

"If you’re looking to boost cattle performance and productivity, combination treatment can be a great option,” said Dr. Step. “By administering a parasiticide from two different classes at the same time, you maximize efficacy and control more parasites — reducing the risk of developing parasite resistance in your herd.”

Commonly used cattle dewormers can be divided into two categories, depending on their chemical structure (see Figure 1), and combination treatment requires using one dewormer from each: 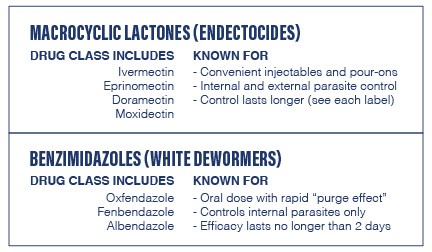 Figure 1. Commonly used cattle dewormers can be divided into two classes, depending on their chemical structure.

Dr. Kaplan adds that there is one caveat to combination treatment that producers should be aware of. “You don’t want to use combination treatment in a low refugia situation because it will promote rapid multiple drug resistance. The simplest way to not worry about this issue is to leave a group of animals untreated every time you deworm.”

3) Refugia. Refugia, where a percentage of the herd is selectively not dewormed, is recognized as the single most important factor in delaying the onset of parasite resistance. Leaving a portion of the parasite population in “refuge” from dewormers reduces the drug-resistance selection pressure caused by the dewormer.

“A common question I get asked is ‘how much refugia is enough?’ and unfortunately the answer is different for every producer,” said Dr. Kaplan. “The percentage of animals to leave untreated is totally dependent on the efficacy of the deworming product you’re using. This is where diagnostic testing and working with your veterinarian become especially important.”

4) Pasture management. Limiting overgrazing, maintaining appropriate forage heights and rotating pastures are all ways to reduce parasite loads in your pastures and to limit the number of parasites that get ingested by the cattle.

“The way we manage our pastures and forages in terms of grazing has a significant impact on how much exposure to parasites our cattle are going to have,” said Dr. Kaplan. “If cattle are grazing on pasture that’s very low to the ground, they’re going to be ingesting many more parasites since most of the parasites are in the bottom two inches of the forage.”

“Following sustainable deworming best practices will benefit your cattle herd and the future of our industry,” concluded Dr. Step. “Be sure to consult with your herd veterinarian to evaluate and customize a deworming program to your individual operation.”