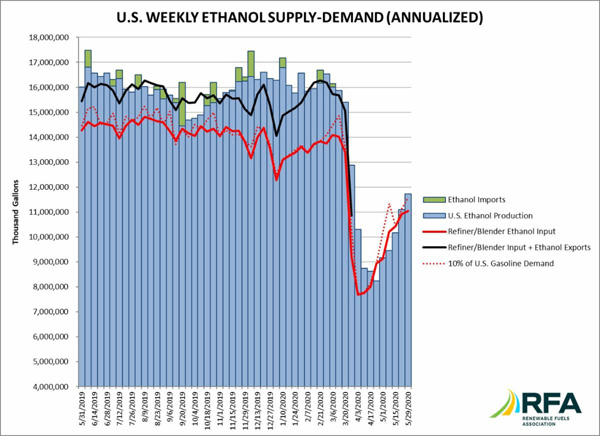 According to EIA data analyzed by the Renewable Fuels Association for the week ending May 29, ethanol production expanded by 5.7%, or 40,000 barrels per day (b/d), to 765,000 b/d-equivalent to 32.13 million gallons daily and the largest volume since March. However, production remains tempered due to COVID-19 disruptions, coming in 26.7% below the same week in 2019. The four-week average ethanol production rate increased 6.3% to 692,000 b/d, equivalent to an annualized rate of 10.61 billion gallons.Ethanol stocks contracted by 3.0% to 22.5 million barrels, the lowest reserves since the first week of January. Inventories tightened across all regions except the Rocky Mountains (PADD 4). Total reserves are 0.3% below year-ago volumes.The volume of gasoline supplied to the U.S. market, a measure of implied demand, scaled up 4.1% to 7.549 million b/d (115.73 bg annualized). Gasoline demand remained 20.0% lower than a year ago. 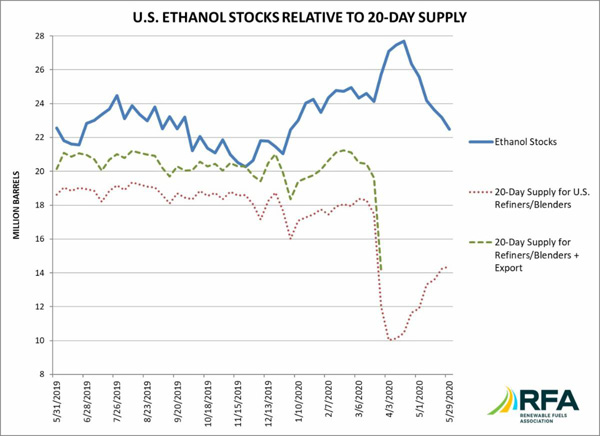 Refiner/blender net inputs of ethanol climbed 1.1% to 720,000 b/d, equivalent to 11.04 bg annualized but 22.7% below the year-earlier level.There were no imports of ethanol recorded for the twelfth consecutive week. (Weekly export data for ethanol is not reported simultaneously; the latest export data is as of March 2020.)