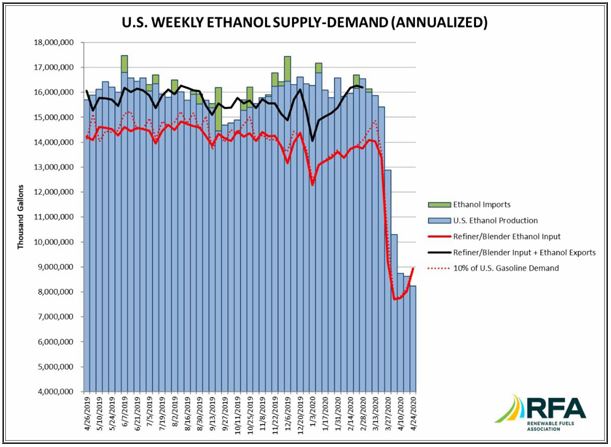 This morning, the EIA released its Weekly Petroleum Status Report for the week ending April 24, which continued to reflect the impact on the ethanol industry from the COVID-19 pandemic.

According to EIA data analyzed by the Renewable Fuels Association, ethanol production scaled back by 4.6%, or 26,000 barrels per day (b/d), to 537,000 b/d-the lowest level since the EIA began reporting ethanol production statistics in 2010. Production was 48% below the same week in 2019. The four-week average ethanol production rate dropped 11.5% to 585,000 b/d, equivalent to an annualized rate of 8.97 billion gallons.

Ethanol stocks contracted for the first time in five weeks, dropping 4.9% from last week's record high to 26.3 million barrels. Stocks lowered across all PADDs, with larger movement in the Gulf Coast (PADD 3) and West Coast (PADD 5) regions-down 9.5% and 10.1%, respectively.

There were no imports of ethanol recorded for the seventh straight week. (Weekly export data for ethanol is not reported simultaneously; the latest export data is as of February 2020.) 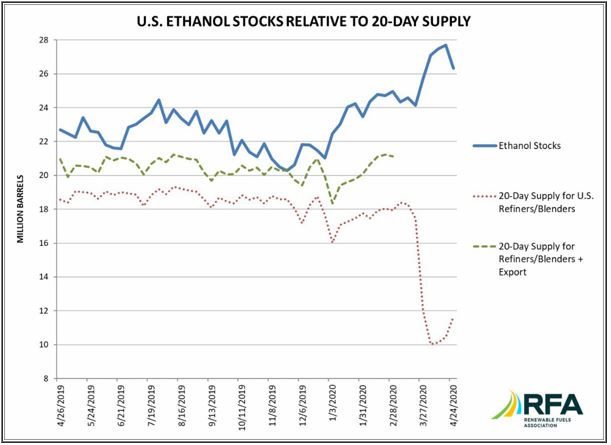