First and second cutting hay yields are being reported as lower than usual in many areas of Ohio this year. Forages took a hit from the late freezes and cold weather this spring, followed by dry weather after first cutting. Fortunately, hay quality is much better than usual.

If forage inventories are going to be short, emergency forages that can still be planted this summer include the warm-season annual grasses planted by mid-July as well as oat, spring triticale, and Italian ryegrass planted during the last week of July into early August. All those forages will be best harvested as silage/haylage or grazed. Brassica crops (turnip, turnip hybrids, rape) can be planted in early August for grazing in late autumn.

Soil moisture is the big concern for any forage planting now. Much of the state is already seeing dry soils and temperatures are high, so the general outlook for seed germination of any kind is not promising right now. The decision to plant or not will have to be made for each individual field, considering soil moisture and the rain forecast. Rainfall/soil moisture in the few weeks immediately after seeding is the primary factor affecting successful establishment of any crop.

Where soils are very dry right now, the wait-and-see approach is prudent. Waiting to plant might take out the option for warm-season grasses since they should be planted by July 15-18. But we still have at least two more weeks before the ideal time to plant oat, spring triticale, Italian ryegrass, and brassica crops (last of July into August). We can hope for rain by then.

As mentioned above, warm-season grasses (sudangrass, sorghum-sudangrass, forage sorghum, millets, teff) will need to be planted by the end of next week (July 15-18). Corn planted up to July 15 is also an option for strip-grazing in autumn. If sufficient soil moisture is present, dry matter yields can reach 2 to 4 tons of dry matter per acre, depending on the species. Last year, western Ohio producers had success interseeding sorghum-sudangrass into weak alfalfa stands; however, soil moisture was not lacking when they planted. This summer, soil moisture in an existing hay crop will be greatly depleted unless there have been recent rains.

Oat, spring triticale, and Italian ryegrass can be planted from the last week of July to mid-September, with forage yields declining as planting is delayed past early August. Brassicas should be planted by early August for acceptable levels of available forage for grazing in late autumn. 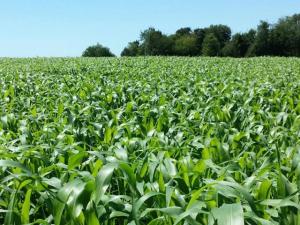