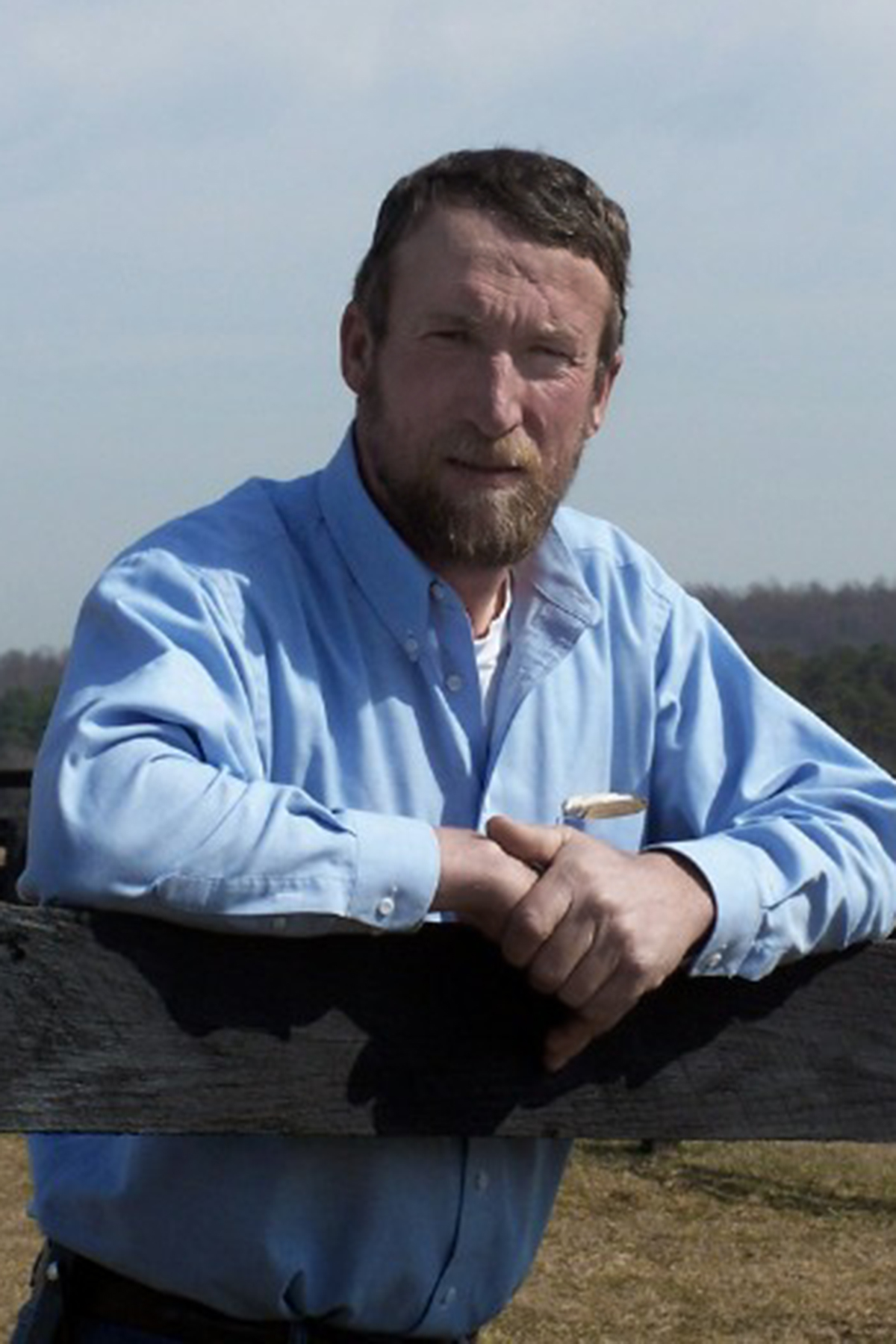 With a sincere passion for the improvement of cattle, Tommy Clark describes himself as a beef enthusiast to the bone. The Culpeper, Virginia, native owns a herd of about 130 cow-calf pairs between the foothills of the Blue Ridge Mountains and the nation’s capital. The herd is primarily purebred Angus, but also consists of some Charolais and commercial cows.

The Clarks sell bulls annually, sometimes through a cooperative-type bull sale, but typically private treaty. The farm consists of about 600 acres of owned and leased land used primarily for pasture and hay, but also some row cropping.

Growing up on a family farm in Culpeper County, the cattle industry runs in Tommy’s blood. After high school, Tommy attended Germanna Community College and started a show and sale cattle fitting service. Mostly, he attended the school of hard knocks, he explains with a laugh. But, these experiences, along with more than 30 years managing two other purebred cattle operations, paved the way for his involvement and service to the Beef Improvement Federation (BIF).

Tommy and wife, D’Arcy, have two college-aged kids, Jessie and Will.

“We all do what we can as we go through life, whether it’s good, bad or indifferent. I’m really grateful to have had a lifetime of experiences in the cattle industry.”

Virginia was the first state to have an organized state beef cattle improvement association, founded in Charlottesville in January 1955. In 1958, Virginia’s first bull test station was developed at Culpeper Agricultural Enterprises. Tommy remembers tagging along with his uncle in the early 1960s to buy bulls out of the Culpeper test station. Culpeper Agricultural Enterprises was also home to the Culpeper-Madison Feeder Calf Association, which was among the first in the state to have a sort of value-added program. Culpeper County was something of a “crown jewel” in the state, being so ahead of its time; the area was home to the bull test station, a value-added program and many elite purebred programs.

Counties just north of Culpeper, closer to the Washington, D.C., metro area, boasted prestigious Angus and Hereford operations when Tommy was young; he remembers attending a national Hereford field day event, hosted in northern Virginia. It was his first exposure to the big picture of the cattle industry and his first interactions with industry leaders.

These experiences contributed to Tommy’s interest in beef improvement and he followed the trail of what was happening in real-time as procedures and technologies were developing. But it wasn’t until Virginia hosted the BIF Annual Research Symposium and Convention in the 1990s that Tommy had a ‘watershed moment’ — he remembers passing around a printed copy of the proceedings and being fascinated by the sheer depth of content and information it contained. Since then, he has immersed himself in BIF, both as an attendee and as a board member.

“Tommy has served on the BIF Board for the past seven years with distinction. He’s a quiet leader who works diligently to understand issues facing the board,” says Bob Weaber, BIF central region secretary.

For Tommy, involvement with BIF is not only about being on the cutting-edge of industry, but also about exposure to others within the beef cattle industry.

Like many producers, Tommy often finds himself caught up in farming when the BIF convention rolls around and wonders if he should take time away from the farm to attend.

“I’m not at BIF convention for more than a day before I’m glad I’m there,” Tommy explains. “You run into folks you otherwise never would have met and develop a pattern of only seeing people at BIF.”

Tommy laughs as he talks about his friend and fellow BIF board member John Genho, who lives less than 20 miles away from Tommy in Virginia. “We see each other at BIF meetings and conventions more than anywhere else!”

Tommy is passionate both about the people he’s had the opportunity to meet and engage with through BIF, as well as the valuable industry information it provides.

“The exposure to current science and what’s going on in industry provides a unique depth of insight to other’s ideas – that’s what keeps me coming back to the trough,” Tommy says regarding his involvement with BIF.

Some highlights of his tenure on the BIF board include working on a committee with 2017-18 BIF President Donnell Brown to standardize recommendations of policies on genetic defects and how they are handled by breed associations; redefining procedures on collecting feed efficiency data; developing recommended guidelines on foot and leg scoring processes; the creation and finalization of WIKI guidelines and making those available to industry; and, most recently, developing a contingency plan to convert to a web-based symposium due to COVID-19.

This year’s program was planned to be hosted in Kissimmee, Florida, the BIF Board of Directors, along with host state representatives, made the decision to transition the annual research symposium and convention to an online format amidst the quickly evolving global pandemic. Once a final decision was made, the transformation from an in-person to virtual format happened rapidly.

Tommy chose to remain positive throughout the situation. “Challenges provide opportunities,” he says. “I really think we will reach more people that we otherwise would not have reached normally. It’s available to more people. Going forward, I think all of these types of conventions will have a lasting effect on people who can’t just pick up and go away for five days.”

Weaber is complementary of Tommy’s positivity, leadership and ability to think outside of the box. “He was one of the first to suggest the incredible opportunity this challenge presents to BIF to test and expand our digital reach in the US and around the world.”

The adaptation of everyday practices caused many people, Tommy included, to look through a different lens.

Part of the BIF symposium experience is personal interaction in the hallways and at meals, but Tommy promises there won’t be any less content, information or benefit to attendees as a result of the change to a virtual format this year.

“It’s just the way we have to adapt. It’s funny; we have breakout sessions on adaptability and technologies in cattle, and now we are having to do the same this year,” he says. “It’s not all negative in this situation. Lots of things were just cancelled, so it’s saying something that we are making it work and continuing on with our conference. We are looking forward to having a wide reach as a result of unfortunate circumstances.”

BIF provides a space for all of those involved in industry to come together and sit down in a non-political atmosphere. Tommy says it doesn’t matter who you are or what area of industry you come from; the discussion boils down to what objectives BIF wants to focus on and accomplish, then a plan is developed to move forward.

“We [BIF] bring a consistent message back to producers – we are able to set aside different preferences and reach for the common thread,” Tommy continues.

Industry and technology are constantly evolving and progressing, often causing standards and policies to become irrelevant shortly after development. Through collective effort, BIF is able to keep up with the perpetual current scenario, evolve and remain relevant to the beef industry.

Always becoming increasingly more prevalent, Tommy says he believes the beef industry should constantly be aware of public perception of its practices and production methods. Under the microscope at the moment is public health, which Tommy says is an opportunity for the beef industry to focus on food safety and industry’s relationship with the public.

While helping export bulls in the 1980s, Tommy became friends with a producer from Australia. The two often communicated via mail and occasionally over the phone, in the middle of the night on the United States’ East Coast. Tommy recalls a line from a letter he received from this friend that has stuck with him to this day –– “Those of us who are truly passionate about improving our cattle do what we can in the short span of a lifetime.” At the time, this quote wasn’t exactly earth-shattering. As the years went on, though, Tommy found more and more meaning in it.

“I was sitting out in a pasture on the hillside with my dog watching an old cow and her heifer calf,” he recalls. “I was really proud of them and I was planning the future of the heifer calf and started thinking forward and realized the real impact and message of that quote.”

This commitment to improving cattle, both on a personal and on a more industry-wide scale, is what drove Tommy to become involved with BIF. Tommy says his tenure on the board has been rewarding and he appreciates the opportunity to be exposed to and influenced by his interactions with other board members. Everybody brings a different perspective to the table; Tommy says it’s a thrill to be in the room on the leading edge of what’s coming down the pipe in the beef industry.

“There’s no way I could ever give back what I’ve gained from BIF, both on the board and as an attendee.”

Still time to register for BIF 2020

The 52nd Annual Beef Improvement Federation Symposium — Online will be hosted the week of June 8 starting at noon CDT each day. The conference will be hosted on the Zoom webinar platform.

This year registration is FREE for all participants. The symposium is made possible through the generous support of many organizations including 2020 Patron Level sponsors Neogen, C-Lock Inc. and Zoetis.

Visit beefimprovement.org/symposium/sponsors to learn more about the businesses and organizations that have partnered with BIF to host this premier beef genetics producer education program.

Follow along during this year’s symposium on social media channels and by using the hashtag #BIF2020.

For a schedule and to register, visit www.beefimprovement.org/symposium