On Saturday, July 27, the non-profit organization hosted its ninth annual Garden Party on behalf of the statewide medical system and, in the process, achieved its highest-ever donation total.

Dairy Cares has transcended its name: What began as a passion project for a small group of dairymen and women now encompasses a broad coalition of agriculture professionals that includes producers, processors, logistics, retail, finance and other industry related fields.

“What unites virtually all of us is that we have either been personally touched by Children’s Hospital or know someone who has,” said Jim Ostrom, Dairy Cares co-founder.

“In 2018, we reached a milestone, having raised a lifetime total of more than $1 million for Children’s Hospital,” he said. “And now, in 2019, we reached another milestone with nearly a quarter of a million raised at the garden party.”

Children’s Hospital, a Milwaukee-based medical system, provides health care services to some of the most critically ill children. Last year, the hospital named its new simulation lab in honor of Dairy Cares for the group’s ongoing support. The lab is an experiential learning space that helps medical professionals practice and prepare for medical crises and worst-case scenarios.

How to give to Dairy Cares

The garden party may be over, but interested individuals can still support the cause.  To give online, visit chw.org/dairycares. For more information on becoming a Dairy Cares sponsor, visit www.dairycaresofwisconsin.org, or contact Laurie Fischer (laurie@lauriefischergroup.com; 920-366-1880). Sponsorships can also be mailed directly to Dairy Cares of Wisconsin, Inc., 1835 E. Edgewood Drive, Suite 10571, Appleton, Wis., 54913.

About Children’s Hospital of Wisconsin

Headquartered in Milwaukee, the Children’s Hospital of Wisconsin provides statewide care through 40 different locations. These various sites provide a range of specialized services, from dealing with childhood terminal illness and cancer to psychological disorders. Experts in premature birth, the neonatal intensive care unit is ranked top in the nation. For more information, visit the website at chw.org. 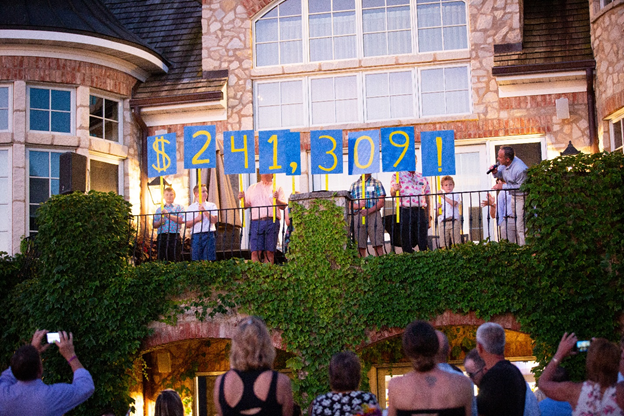 Animart CEO Dan Ellsworth (on the balcony, at right) served as auctioneer during this year’s Dairy Cares of Wisconsin garden party. The event raised a single-evening record of $241,500 on behalf of Children’s Hospital of Wisconsin.