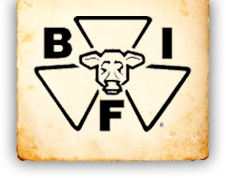 MANHATTAN, Kan. – The Beef Improvement Federation (BIF) announced finalists for its Seedstock and Commercial Producer awards on Friday, May 22. Both developed in 1972, the Seedstock Producer Award recognizes outstanding seedstock producers across the nation while the Commercial Producer Award recognizes commercial producers for their dedication to improving the beef industry at the commercial level.

Grund Beef Genetics, Sharon Springs, Kansas, was nominated by the Kansas Livestock Association. The operation consists of about 400 head of cattle, both purebred and commercial seedstock. The purebred operation included Gelbvieh, Angus and Red Angus genetics. Balancer cattle is the predominate breed on the ranch, providing profitable traits of crossbreeding to their customers.

Town Creek Farm, West Point, Mississippi, is a Brangus seedstock operation founded in 1993. The cow herd consists of 500 Brangus and Ultrablack cows; 90 Brahman, three-quarter Brahman and Vigormax™ cows; and 250 commercial Brangus cows. The operation has a strong international business, marketing live animals, semen and embryos into Australia, Brazil, Paraguay and Thailand. In collaboration with NEOGEN and the University of Florida, a DNA product was developed to identify the percent Bos indicus in cattle, resulting in Town Creek Farm introducing and trademarking VigorMax™ and TruVigor™ cattle. Town Creek Farm was nominated by the Mississippi Beef Cattle Improvement Association.

The winner of the Seedstock Producer Award will be announced during the BIF Symposium Online Awards program Wednesday, June 10 at 1 p.m. CDT. Beef Magazine sponsors both the Seedstock and Commercial Producer of the Year awards.

Brentwood Farms, Brent, Alabama, was established in 2014 and consists of approximately 400 Simmental and Angus-cross cows. With an eye on performance, the Brentwood Farms foundation has been built from Alabama BCIA proven genetics, from fellow BCIA producers and bull evaluations, along with leading genetics in the utilization of artificial insemination. The operation runs on a 90-day fall calving season and grazes Bahia and Bermudagrass pastures. Brentwood Farms is nominated by the Alabama Beef Cattle Improvement Association.

Kempfer Cattle Company, based in St. Cloud, Florida, is six generations strong. In addition to approximately 3,000 cows and 750 replacement females on 25,000 acres in Florida, the Kempfers also operate a heifer development program in Macon, Mississippi, on 2,000 acres. Ninety percent of the cow herd is a commercial mix of Brahman, Angus and Shorthorn bulls for a maternal cross and Charolais for terminal crosses. The balance are purebred Brahman and Angus cattle. Replacements are required to have a minimum of 50% Brahman blood. Kempfer Cattle Company was nominated by the University of Florida’s Department of Animal Sciences.

Vest Ranches, Childress, Texas, consists of 1,200 head of progressive Angus and Charolais cattle. Their unique feeding program, 75-day breeding season and December calving, and management of limited forage and water resources separates their ranch from others, all while improving rangelands and wildlife habitat. Vest Ranch cattle must be hard workers without sacrificing condition in order to thrive in the harsh landscape of West Texas. Vest Ranches is the definition of sustainability, making the land, cattle and business viable to pass to the coveted fifth generation and beyond. The American Angus Association and the American-International Charolais Association nominated Vest Ranches.

The Commercial Producer Award will be presented Tuesday, June 9 at 1 p.m. CDT.

A complete list of nominees, as well as biographies, can be found at BeefImprovement.org/symposium/awards.

BIF will host its 52nd Annual Beef Improvement Federation Symposium — Online the week of June 8 starting at noon CDT each day. For a complete schedule and to register for the free online symposium visit, BeefImprovement.org/symposium.

The Beef Improvement Federation (BIF) is an organization dedicated to coordinating all segments of the beef industry — from researchers and producers to retailers — in an effort to improve the efficiency, profitability and sustainability of beef production. The organization was initiated more than 50 years ago to encourage the use of objective measurements to evaluate beef cattle. Continuing the tradition, BIF is now the clearinghouse for developing standardized programs and methodologies for recording of performance data for all traits, from birth weights to carcass traits. Its three-leaf-clover logo symbolizes the link between industry, extension and research.