Wholesale and retail beef markets have endured enormous upheaval since mid-March.  Starting March 16, the surge in retail grocery buying put huge demands on retail supply chains resulting in dramatic and immediate spikes in wholesale beef prices.  As shown in Table 1, the overall cutout jumped by nearly 19 percent in a matter of three days.  Wholesale prices continued to push higher until March 23, peaking at $257.32 cwt., up 23.6 percent from March 13 levels.  Since then, the cutout has dropped over 10 percent to $230.44/cwt. on April 3.  It is not clear exactly where the boxed beef cutout will settle out in the coming days.  At the same time, the demand for food service has dropped sharply leading to a diverse set of impacts on various wholesale beef cuts. 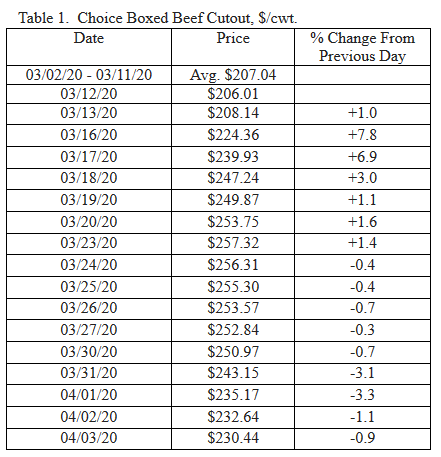 Table 2 shows the changes in weekly wholesale beef product prices since early March.  Middle meats, which are dominated by restaurant demand, have dropped while end meats have surged on grocery demand.  Prices for most steak items are lower including the tenderloin (189A), down 29 percent and ribeye (112A), down 7.7 percent since early March.  Prices for the Petite tender (114F), a popular restaurant item, is down over 32 percent.   Short ribs (123A), a popular export item, are down 47 percent in price.  Prices for loin strips (180), a popular summer grilling steak that is normally increasing seasonally at this time, is up over 22 percent. Top sirloin (184), is a multi-purpose steak is used in both restaurants and at retail grocery, is priced nearly 13 percent higher.

At the same time, end meat prices, which are typically declining into the summer, are higher driven by grocery demand for value cuts and ground beef.  Prices are sharply stronger for the shoulder clod (114A), up 49 percent and Chuck rolls (116A), up 32 percent along with Round items including the Top round (168), up 33 percent; outside round (171B), up 47 percent and eye of round (171C), up 25 percent.