Livestock Comments:  Lull next week and then full bore in December

Finished cattle prices continued higher this week to the delight of cattle feeders. Margins for packers are slowly declining as finished cattle prices increase and as boxed beef prices decrease, but that is of no concern since packer margins were already very large. However, the cattle feeder is sure to be capitalizing on strong margins as finished prices continue inching higher. The question is if this trend will persist and for how long. Live cattle futures have prices moving $4 to $5 higher by February and exceeding $140 in April. This may well be a mountain the market can climb. Or, it may even be a mountain that the market turns into a mole hill as pushing higher than $140 is easily in reach given this week’s prices.

OUTLOOK:   Based on Tennessee weekly auction market data, steer prices were steady to $1 higher than last week while heifer prices were steady to $2 lower compared to the previous week. Slaughter cow prices were steady while bull prices were mainly steady compared to a week ago. The calf market has been making a contra--seasonal price move since the fourth quarter price lows were hit the first week of October. In Tennessee, 550 pound steers bottomed at $140 per hundredweight at the beginning of October. Since that time, 550 pound steer prices have increased $6 per hundredweight bringing the average value of a 550 pound steer back above $800 per head. It is difficult to know with certainty what prices of lightweight calves will do over the next several weeks, but it is likely they have already reached their fall lows and will remain above the $140 price point in Tennessee. This same price pattern is mimicked across the nation as winter wheat grazing and good fall forage growing conditions have been present in the South east.

Stocker producers are having to manage around the higher corn prices relative to last year, but forage is in good condition. The expectation is that prices will have a lull next week with Thanksgiving slowing cattle movement. However, the market will be full bore ahead the first three weeks of December as buyers attempt to get as many head purchased leading up to the Christmas and New Year holidays. The yearling market will be heavily influenced by the finished cattle market and the feed market. There have been some cases where feeder cattle prices were certainly moving in the opposite direction of corn price, which is to be expected. Similarly, the market has shown that feeder cattle will follow live cattle prices higher or lower. Cattle markets are rounding into form as the market heads to December, and there is significant optimism moving into 2022. 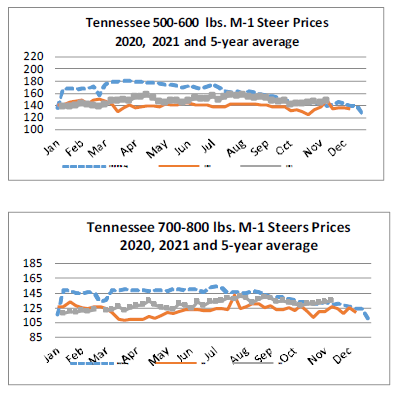